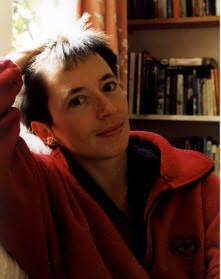 After receiving my first review copy through the courtesy of the nice people from Bantam Books, Miss Manda Scott, the author of "The Crystal Skull", had the amability to answer my questions for my first interview. Manda Scott is a veterinary surgeon and she was trained at the University of Glasgow School of Veterinary Medicine. She was nominated for the 1997 Orange Prize with the novel "Hen's Teeth" and for the 2003 Edgar Award with the novel "No Good Deed". Her works include also the "Boudica" series. You can find her full bibliography at Fantastic Fiction.
Dark Wolf: I know that you are a veterinary surgeon and I think this comes from the passion and care for animals, but can you tell us from where comes the passion for writing?
Manda Scott: To be honest, I have no idea, but it's always been there. When I was a child, our family home was a raptor rehab centre and I spent my life writing books that had been "written by" the owls... I started a novel when I was 8 or so... I imagine it came from being a particularly introverted child who lived her life mostly through books and through animals, but that's an easy adult's viewpoint.

Dark Wolf: From the genres of your novels, crime fiction, historical fiction, thriller is there one closer to your heart?
Manda Scott: Anything well-written is close to my heart and there are very few of those... A well-written historical thriller is a joy, but any book where language, plot and character are exceptionally crafted is a fantastic find. I just wish there were more of them.

DW: Do you consider trying another genre in the future?
MS: Definitely. I think as writers, we have an opportunity and an ethical and moral obligation not only to hold a mirror to who we were and who we could be (Boudica), but also to show how we can progress forward. There are a lot of futuristic dystopias - I just read Susan Hall's book, "The Carhullan Army" - which was excellent - but we have a window of opportunity now to fashion our future for when the oil runs out - and we need to have imagined how it could be. So I have plans for a book doing exactly that, although quite what genre it would fit into is debatable.
DW: How do you feel knowing that your novels travel through world, being translated and read in many countries?
MS: Very, very good! (as long as they're good translations, of course)

DW: I noticed in "The Crystal Skull" a load of information and I think the research work for such a novel must have been very hard. How long does it take the research for a novel?
MS: It takes anything up to 6 months at the start, and then ongoing research while I'm writing. I'd been thinking about Skull for a while, so the lead-in reasearch was shorter, but the work during it, particularly on the Tudor thread, was greater.

DW: Does your passion for climbing influenced the passion of "The Crystal Skull" character, Stella, for caving?
MS: Definitely. Though I am hugely scared of caving, so I was, in a way, writing through my own fear of being trapped underground. But the dynamics of caving and climbing are very similar, and the experience of the utter awe at the magnitude and magnificence of the earth are common to both.
DW: Do you belive that the prophecy present in your novel, that the world would end on 21.12.2012 can be true?
MS: I don't think 2012 is an end date, but I do, absolutely think it's the mid-point in an event cycle which will end in the total annihilation of mankind and the extinction of millions of species if we don't act now. I think we're recognisably in that event cycle - but there is still time to act. That's why I wrote the book.
DW: Considering that mayan history appears in your novel, may I ask if you saw Mr. Mel Gibson's movie "Apocalypto"? Did you liked it?
MS: I'm afraid to say I haven't seen it. I don't really watch TV or movies much, though I'll probably go to see "Indiana Jones and the Kingdom of the Crystal Skull" when it comes out next month, just for curiosity - and because we have various people interested in making a film of the book and so it would be useful to know what's in the film. The advance stuff I've heard suggest it's not particularly linked.

DW: Considering the controversy around this movie and the fact that you write historical fiction, do you belive that the historical facts and information must be very accurate or you can improvise?
MS: The known facts - when they are facts (such as the fact that stirrups weren't invented in Roman times, and so Gladiator was one big long anachronism) must be accurate. The opinions based on cultural prejudice which are displayed as fact must be challenged.
DW: In the end, can you tell us if you have any ideas or any plans for a new book?
MS: I'm writing a book which has my file title "FIRE!" (short, easy to find on the computer) which I would like to have the final title of "The Spy, The Saint and The Messiah's Daughter" which is set in 64 AD, the year of the Great Fire of Rome. It is a chance to look tangentially at some of the survivors of the Boudica series, being set only 3 years after the end of the Boudican revolt, but primarily it's a Roman spy thriller set in Gaul and Rome in which Seneca is the ageing spymaster who has lost control of Saulos the Herodian, one of his primary agents (we know him as St. Paul) and has to persuade his other remaining agent to stop Saulos before he burns Rome in fulfilment of a prophecy. It's largely looking at very early Christianity and the schizm between Paul and the early Hebrew church from which he was excommunicated. It should be ready for publication some time in 2009.
Miss Scott it has been an honor and a pleasure and thank you once again for your answers and amability.
Posted by Mihai A. at 10:51 AM

Great interview! You are so polite, Mihai! I felt like you interviewed the Queen of England and that is how you should make all the authors feel.

Thank you Harry. You know they all do a great job, even if I don't like one book or another. And I just like to be around them, even though I'm in a smaller league than them :)

True enough. I like your way of thinking. It's great to be around authors and I aspire to be one of them someday. Hopefully! And well you are not a small fish as what we as review bloggers do is important, spreading the word and all. Faster that is.

Great job, Mihai! I hope to see more of your interviews :)

Nice interview! Congrats on it being your first one :)

Harry, when you'll be writer don't forget us :)

Robert and Sara thank you very much. You are nice as always.

Nah :) Never! I'll be a reviewer writer. I'll be a rare bird, because of that. Anyways I am light years away from being published, my novel lays 1/3 done and who knows, which exactly manuscript will be the winner.

I don't know if this information is newer than the article, but the Romans did indeed use stirrups from the late 2nd/ early 3rd century.

Kevin MacDonald's film The Eagle also used stirrups, but this was because of the insurance company's fear that Channing Tatum or Jamie Bell would fall from their horses.

So I think we need to give these films a little leeway. I have greater criticisms on Gladiator than stirrups!