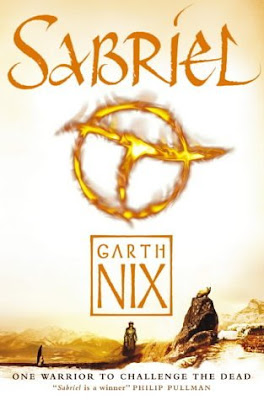 "Sabriel"
by Garth Nix
Format: Paperback, 368 pages
Publisher: Harper Voyager
"Sabriel" is the first novel of "The Old Kingdom" serie by Garth Nix.
Sabriel, a necromancer's daughter, is sent by her father to study in Ancelstierre. Her father is the Abhorsen, a necromancer that puts the dead to rest or prevents them to come back to life. After many years in school she finds out that her father is missing and so she begins a journey in search of him. She travels to the Old Kingdom, the northern neighbour of Ancelstierre and her birth land. Here she finds that she has inherited the title of Abhorsen and that she has to fight an evil that threats the land and tries to kill her father.
I liked the novel. Garth Nix creates an entertaining world, an interesting magic system and enjoyable characters. The world consists in two major lands, Ancelstierre, a land that resembles our world, with technology, electricity and where the magic doesn't work and the Old Kingdom, north of Ancelstierre, which is a fantastic land, where magic works. This two lands are separeted by the Wall. I liked the world created by Garth Nix and I liked that even though he doesn't spent too much time in building it he describes it well. For example, when the characters reach Belisaere, the capital of the Old Kingdom, the author makes a description that is almost visual.
The magic system is another part I enjoyed. We have two kinds of magic, Free Magic, that is an unbound magic, raw and chaotic and the Charter, the magic that is used by Abhorsen and usually the inhabitants of the Old Kingdom bear a Charter mark on their foreheads. The Charter can be made using symbols, memorized by the spellcaster or by whistling a specific tune. The Abhorsen has also a set of seven bells that helps him cast spells or improving the ones made with the Charter. I loved that the author fully explained what the bells do and what are they for.
The characters are enjoyable, very well constructed. Sabriel is a young girl that starts a journey that will change her. I love how Garth Nix developes this character. He manages to catch the changes in the character, her coming of age and her transformation from the girl that saves a school colleague's bunny to the necromancer that tries to save the kingdom. The character that I loved the most is Mogget. Mogget is an unknown creature that takes the shape of a white cat. The author does a great job with Mogget, he behaves like a cat, a talking cat actually, and I loved when he was precious or bored. I also loved his sarcasm, his cynism and how he ridicules the other characters.
Overall Garth Nix's "Sabriel" was a very fun read for me and one that I will hold dear.
Posted by Mihai A. at 12:39 PM

Oh, this sounds like a wow read for me. Magic system that involves different types of magic and bells. That is simply breath taking from my point of view. Thank you for the insight on this novel. It's on my TBR pile.

I've been meaning to read these books for some time actually, but haven't found a good opportunity. Thanks for reminding me about them!

It was on my reading pile for sometime too, but I managed to read it. Now I have to look for the other books in the serie because I don't have them yet.
But this one can be read pretty much as a stand-alone too.

I like what you are doing here; tnx for visiting...I'm blogrolling this site. keep up the good work,
thrin

Sabriel is easily one of my favorite books. The rich world and characters Nix creates are a joy to read. Any fan of fantasy must read this!

Drew, I love it too. And through "Sabriel" I discovered Garth Nix :)