"Promise of the Witch-King" by R.A. Salvatore 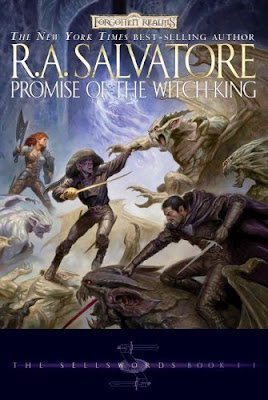 "Promise of the Witch-King"
by R.A. Salvatore
Format: Paperback, 384 pages
Publisher: Wizards of the Coast
I fell in love with fantasy literature since I had started reading. In fantasy one of my favourite character is Drizzt Do'Urden, created by R.A. Salvatore. Through Drizzt Do'Urden I met Jarlaxle, a mercenary drow elf, and Artemis Entreri, an assassin, the arch-enemy of Drizzt, the main characters of "Promise of the Witch-King".
In "Promise of the Witch-King", the second novel of "The Sellswords" trilogy, Jarlaxle and Artemis arrive in Bloodstone Lands following their adventures in Calimport. Here they are hired by two dragon sisters, Ilnezhara and Tazmikella, to find some relics that belonged to the Witch-King Zhengyi. So, the two of them become part of a group of adventurers that goes in the town of Palishchuk to investigate a castle that appeared after such a relic is found and used. Inside the castle, and I will say this without spoiling your read, they will come across some very interesting moments.
The novel is basically a "dungeon crawl", not my favourite type of story, because I think it's predictable and limited. But R.A. Salvatore does an amzing job in "Promise of the Witch-King" and manages to keep me interested all the way to the finish. He creates an intrigue and some twists and turns that extends the limits of this dungeon crawl.
Even from the opening part of the novel, when Jarlaxle and Artemis Entreri explore a tower of a lich, the pace is quick, full of action and details, and it gets better in the next chapters. The fighting scenes are great, very well described, keeping the high standard as well as the others of this kind of the author. I enjoyed this scenes very much, like I enjoyed the humour of some dialogues, amusing and entertaining, like I enjoyed the funny sequences of the Kneebreakers, a band of halflings or the way Athrogate, a dwarf, talks using rhymes. I enjoyed Jarlaxle, a character that begins to develop and is not tipical in fantasy literature.
In this novel R.A. Salvatore introduces new characters, but I think they are a little underdeveloped. Also I wondered how and why Jarlaxle and Artemis Entreri found themselves in Bloodstone Lands, following the events in the first novel of the trilogy, "Servant of the Shard". But this are minor issues considering the bigger picture, they can be easily overcome in the next novel. Adding that the author teases us with a small part of Jarlaxle's past and that the cold and calculated assassin Artemis Entreri has an inner conflict and developes more human feelings I certainly will read with interest the third book of the trilogy, "Road of the Patriarch".
"Promise of the Witch-King" offered me a engaging and entertaining reading, and this novel confirms that R.A. Salvatore is one of the best fantasy writers (also I loved the cover art of Todd Lockwood). I recommend the novel, but if you haven't read the first novel, "Servant of the Shard", it is better to start with that one because it will help you get used to the two main characters and their actions
Posted by Mihai A. at 11:19 AM

I like these types of stories. Quite frankly I enjoy almost every kind of story; my tastes in literature range very far.

I can't form my thoughts very clearly right now on this matter, but the action seems to make me want to venture on. In terms of anology it's like watching an Indiana Jones movies. You know that in the end he will achieve his task, but it's how he does it what makes you want to watch; in this case make you read.

It is a fun and entertaining read.

Which Salvatore book would you recommend first? I haven't read any yet...

I liked a lot Drizzt Do'Urden books. I recommend to start with "The Dark Elf" trilogy and "The Icewind Dale" trilogy. I really loved this two.