"Do Androids Dream of Electric Sheep?" by Philip K. Dick 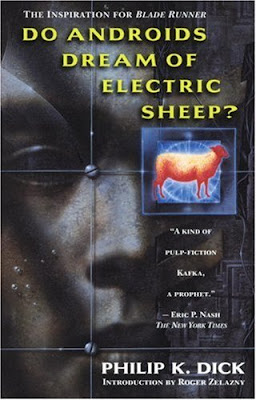 "Do Androids Dream of Electric Sheep?"
by Philip K. Dick
Format: Paperback, 256 pages
Publisher: Del Rey Books
Every time I read Philip K. Dick's "Do Androids Dream of Electric Sheep?" the book gets better and I end up discovering new things.
The action is set in the future (actually in 1992, but you have to consider that the novel was written in 1968) when much of the Earth is destroyed by the World War and covered with radioactive dust. People are encouraged to emigrate to the off-worlds and part of that encouragement is an offer for a free android servant. After eight androids escape and flee from Mars on Earth, Rick Deckard, a bounty hunter for the San Francisco Police Department, is sent to track them down.
Philip K. Dick creates an extraordinary novel, set in a grim and dark world. I love this novel and I think is one of the best I read, I love the setting, I love the ideas of Philip K. Dick and I love Rick Deckard. Rick Deckard is one of the best and most human characters in literature. I liked his inner conflicts and fears, I like his vulnerability and his uneasiness and this details make a very real character out of him. Is one of the characters in literature that I felt for and identify with.
I love the future world constructed by Philip K. Dick, as much as you can love a world without hope. All the aspects and details show you a decaying and dying world. A world in which the social status is set based on what type of pet animal the person posses and if that animal is real or mechanical. I really liked the religion aspect too, the Mercerism. It is masterful created, rich in details and with all the theological and philosophical aspects resulted from it. In the novel the people use an Empathy Box, a device in which people can interact with each other and with Wilbur Mercer, a man that lived before the war and his legend is the foundation of Mercerism.
Another aspect that I really enjoyed is the devices that you can find in the novel. The Empathy Box, the device that I mentioned before, Penfield Mood Organ, a device that induces a certain emotion or mood to its users, like one that I find very amusing "desire to watch television, no matter what's on it", and the device used for the Voight-Kampff empathy test, a test used by the bounty hunters that identifies the androids.
Like I said I really love "Do Androids Dream of Electric Sheep?" and I will put this novel on top of every recommendation list. And I will recommend the ecranization of the novel too, "Blade Runner", that although isn't exactly like the book is a very good movie.
Posted by Mihai A. at 12:27 PM

Nice one. I gotta read it then. I am not much of a sci-fi fan, but so far I have read only decent works.

I highly recommend it :)