The novel or the movie? 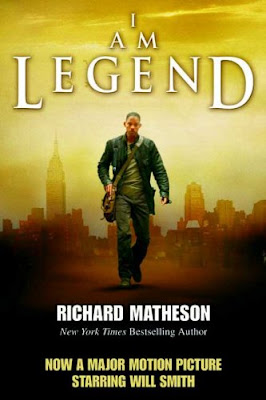 For ordering information: Amazon UK & Amazon US
I saw "I Am Legend" last night but I have to say that I was disappointed. Don't get me wrong, I like post-apocalyptic scenarios and novels because of their psychological aspects, but this movie failed to captivate me. And being the ecranization of Richard Matheson's "I Am Legend" made the things worst (you can find an excellent review of the book at Fantasy Book Critic). The movie has some logical errors, some events are not fully explained and I didn't felt a thing for Robert Neville, the character played by Will Smith, I didn't care if he got hurt, if he lives or if he dies. I saw "28 Days Later...", a movie that has the same general idea, and I like it. It has more drama, more tension and I connected more with the characters.

But if I think about the ecranizations of other novels I shouldn't be so disappointed. It isn't the first or the last ecranization that I'm not enjoying it. Let's see if I can recall some other movies that didn't live up my expectations: "The Stand" a TV mini serie after the novel of Stephen King, "Mr. Murder" after the novel of Dean Koontz, "Dune" the ecranization of Frank Herbert's novel and "Earthsea" after the novels of Ursula K. Le Guin. And this are only the first that I can think of. To be correct I have to tell you about those that I consider good: "The Green Mile" by Stephen King, "The Lord of the Rings" the trilogy of J.R.R. Tolkien, the Harry Potter serie after J.K. Rowling's novels and "Blade Runner" the ecranization of Philip K. Dick's "Do Androids Dream of Electric Sheep?".

I'm sure that the ecranizations are a tricky thing and I like seeing how directors or screenplay writers visualize the novels I love, but I definitely prefer the books to the movies.
Posted by Mihai A. at 12:26 PM

Movie adaptations of books are tricky things. Very few are actually worth the price of admission like the LOTR or Blade Runner that you mentioned. Regarding I Am Legend, I thought I was going to hate it, but actually I didn't think it was too bad. Obviously they changed some things, but Will Smith's performance was surprisingly strong. Overall, the movie was not as good as it could have been, but it wasn't as bad as I thought it would be either...

It isn't all bad, it has that psychological conflict when you find yourself all alone, I think it's a very tough situation. Or like one the characters of "28 Days Later..." says that you know that you will not read a new book or see a new movie anymore.

In my article I made more a comparison with the book so that's why I was disappointed.

I agree with Robert on this you know and well I really don't like ecranizations. I watched "Carrie" by Stephen King and it was abd movie, partly because it was filmed in 1976.

I haven't read the book "I am Legend" and I can't compare, but I found the movie to have its strengths like the lack of suspense musica nd that way I was on the edge, because I couldn't predict, when something scarry was gonna happen. The element of surprise was preserved and that is a major plus.

Earthsea was an abomination, the movie that is, since the whole name system was reversed as much as I can remember. The hidden names were used as normal, while the normal ones were the hidden. It's blah!

Yes Earthsea is one of the worst ecranizations I've seen.

I actually liked I am Legend other than the end (and I also couldn't figure out why Will Smith's character wouldn't be suitably paranoid to avoid approaching the moved mannequin, but whatever).

There's an alternate ending that you can see if you google it, but I didn't really even like that one terribly much either.

One of the things I really respeted about the movie was how it built up suspense in the first half of it--I was actually on the edge of my seat as he ran out of that dark building after finding Sam. I usually don't feel that way at all about movies, but this one effectively gave me some giblies.

Don't get me wrong. As a movie is enjoyable, but I was disappointed as ecranization. And as I said it is not the only one that disappointed me.

I liked the scene with the dark building, but I was worried about Sam.