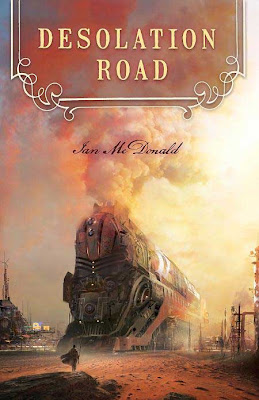 This July a much appreciated novel will see a reprint. Ian McDonald’s debut novel, “Desolation Road”, published for the first time in 1988 will be re-published by Pyr SF. The novel was nominated for the Arthur C. Clarke Award and gathered many praising words since its first publishing.
It all began thirty years ago on Mars, with a greenperson. But by the time it all finished, the town of Desolation Road had experienced every conceivable abnormality from Adam Black's Wonderful Travelling Chautauqua and Educational ‘Stravaganza (complete with its very own captive angel) to the Astounding Tatterdemalion Air Bazaar. Its inhabitants ranged from Dr. Alimantando, the town’s founder and resident genius, to the Babooshka, a barren grandmother who just wants her own child—grown in a fruit jar; from Rajendra Das, mechanical hobo who has a mystical way with machines to the Gallacelli brothers, identical triplets who fell in love with—and married—the same woman.
And as you can see the new edition benefits from a very interesting cover art, which to be honest would have caught my eye although I didn’t know the title or the author. The cover was created by the multiple award winner and fascinating Stephan Martiniere.
Posted by Mihai A. at 12:36 PM

I've been a huge fan of McDonald but have only ever read Necroville and Chaga - I highly recommend both; incredible SF tales! This looks beautiful, though; I saw it a while ago on McDonald's LJ but it's great to see it getting some extra exposure. :-) Check your email, Mihai, sending you a link to some cover art you'll appreciate. :-)

I like the artwork very much.
maybe the reason forthis is that I have a passion for steampunk.

That is some seriously well-done cover art.

too bad they're doing it in trade paperback, not hardcover, this is definitely a keeper :)

WOw, this is a great cover. I love steampunk images ,too.I took the liberty to show the image around my blog, i hope you don`t mind.I used your blog in the link area ;)Thank you, MIhai:)

Dave, thank you for pointing me to the Star Wars cover :) And a Star Wars horror title sounds interesting ;)

Michael, I believe that the novel has some steampunk elements :)

Jacquelyn, I really love it too :)

Bogdan, no problem. I am glad you like it :)

If I had seen the cover without knowing about the author or the title, that alone would have made me pick the book up. Then with a quick perusal of the innards to learn it was SF, I'd be off to the checkout counter with it in hand.

Barbara, you are absolutely right, I would have bought the book without knowledge about title or author :)