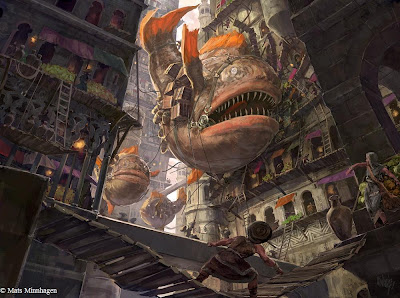 © The artwork presented on this post is used with the permission of its author. All the artwork is copyrighted. Please do not use the images without the permission of the artist or owner.
Mats Minnhagen is a Swedish artist born in 1979. Mats has a Masters in Archaeology and at first he followed an academic career. After discovering the digital art his career focused changed toward art. Between 2004 and 2006 he attended the courses of Gotland’s School of Art. His preferred genres are fantasy and sci-fi and preferred medium of work is digital art. He has realized many works featured on book covers, role playing games, magazines and posters. Mats Minnhagen won a Master Award in the Creatures Category of Exposé 6.
Interview - Mats Minnhagen 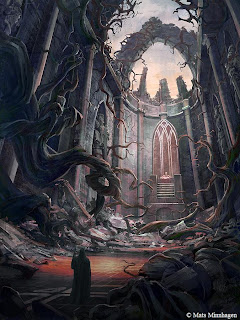 Dark Wolf: Mats, thank you for this interview.
You have a Master in Archaeology and you pursued an academic career. What made you turn to art? What motivate such a change in your life and career?
Mats Minnhagen: I have always been drawing, and as a kid I envisioned myself someday becoming an illustrator. But for a time there were other things that interested me more. This was before the digital art revolution; I didn't know then about digital painting tools. Neither did I realize how computer games and the internet was creating new markets and opportunities for illustrators. When I finally did realize this my interest in art was renewed. I bought a wacom and soon started doing small commissions. I had the feeling I'd almost "missed the train"; I was getting older and realized I had a long way to catch up. But I also felt that, after all, this was my true calling. So I decided to leave my academic pursuit and go for a career in illustration.It was a gradual decision, but if I had to pinpoint an important moment it would be my first encounter with digital art: I stumbled into Craig Mullins' website late one night and ended up going though his entire enormous gallery, completely awestruck. I had never seen anything like it and it made a huge impression.
Dark Wolf: How did you start drawing? Was it difficult to return to school for studying art?
Mats Minnhagen: As a kid, I used to be "the guy who could draw", but I was almost completely self-taught and when I finally decided to go to art school I wasn't quite sure how big or small the gaps in my artistic knowledge would prove to be. I soon found my place, however, and had the best two years of my life. It was a traditional school - lots of life drawing and no digital tools - but that was what I wanted. The digital techniques I taught myself in the evenings, from internet and magazines.
Dark Wolf: What influences has your work and who was most influential on your career so far? 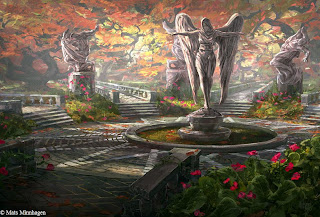 Mats Minnhagen: When I was younger it was definitely Tolkien illustrators Alan Lee, John Howe and Angus McBride. I had the walls of my room all covered with prints of their paintings. Later when I discovered digital art it was, of course, Craig Mullins, but also Sparth, John Wallin Liberto and several others. I'm also a big fan of Paul Bonner, who did some amazing interpretations of nordic folklore for a Swedish rpg ("Drakar och Demoner").

DW: You worked using the traditional tools (oil, acrylic, pencil) and the digital tools as well. Which one do you prefer? Which one gives you the more freedom of action?
MM: I'll have to say digital tools. It's quick, there's no mess and you can experiment with your painting a lot more. Almost all of my commissioned work has been digital. I very much appreciate the way you can, when you're done painting, just save and turn off the computer without having to clean your brushes and tidy up. There are no fumes either. Back when I studied at the university I used to paint with oils in my tiny student apartment - not a great thing for your health!
DW: Many of your works are focused on fantasy and Sci-Fi genres. Do you feel attracted by these particular themes? Does your interest for these genres go outside art?
MM: Yes. Fantasy and Science Fiction (or more generally Surrealism) is for me all about viewing mankind though a mirror, in order to see things that you were blind to before. Much like when you're painting and mirror your image to see it with fresh eyes, by taking us humans out our familiar context and putting us in exotic ones, we can suddenly stand out clearer. Fantasy and Sci-Fi isn't just about escapism; it's not really about elves and dwarves or robots and space ships, but something much more important. It's about us; our nature and our place in existance. Through these genres you can deal with questions that other, more worldly genres don't reach. As far as a distinction is necessary between Fantasy and Sci-Fi, the former does so on a poetical level, the latter on a more philosophical one. I think I've always been fascinated by "mirroring" the world. I read a lot of Fantasy when I was younger (and still do) and it was also part of what drew me to Archaeology. Our real history is also a mirror; humans have been the same for two hundred thousand years but have been placed in many diffent, strange worlds during the millennia. How have we responded, and what can it tell us of our nature? As a scientist you search for the answer, as an artist you try to put it into words.
DW: You made a few book illustrations. How much did you enjoy creating those works? Is there a book which you would like to illustrate in particular? MM: I enjoy doing book illustration. The challenge is to choose which scenes to illustrate and decide what to focus on in those scenes. A scene from a book can be illustrated in many different ways, depending on which aspect of the story you want to get across. I also feel that a good book illustration should work just as well even if you haven't read the story, so there should be a balance between specific and universal storytelling elements.As for a specific book I'd like to illustrate, a few years ago I would have said "Lord of the Rings". By now, however, it's been so thoroughly explored that I'd rather not! I like older fairytales, the original folklore and mythology that fantasy was derived from. These tales are often complex, colourful and mingled with historic realities in interesting ways. So my answer would be "nordic folk tales" or something of the sort.
DW: I’ve seen a number of pieces made for children. Do you enjoy working for the younger audience? How much different is working on a children illustration than one aimed for a more mature audience?
MM: I like painting in a playful style, and that fits childrens' illustration quite well. That said, I don't think a playful style necessarily excludes an older audience. I try to do something that I myself would have enjoyed as a child, but also something that the child inside me still appreciates. On a general level, I think it's important to identify a part of yourself within the target group. If you're too detached from it, your soul won't be in it and the result will suffer.
DW: You won a Master Award in Creatures Category in Expose 6. How did you feel winning this award? Did this award change your career so far?
MM: It was a total surprise! I still have a lot to learn, it feels like I've just started out as an illustrator. But it's great; I'm very happy for it and it's motivating me even more - now I have something to try to live up to. I'm not sure how much the award actually affected my career so far, there might have been a few more people contacting me because of the Exposé publicity. But there hasn't been an overnight change.
DW: When did you feel that you were most challenged in your work until now? MM: Book illustration has propably been the most interesting artistic challenge so far. And of course, working as concept artist on EA Dice was a challenge, of a different sort; a big studio with large productions. Everything is challenging in different ways.
DW: What would be a work opportunity which will be hard to refuse? What future projects do you have?
MM: It would be great to work on a movie sometime, maybe some big fantasy blockbuster. At the moment, and in the nearest future, I'm working on a popular science project. That's also a lot of fun, and I get to revisit some old subjects from school!
Thank you very much for your time and answers. 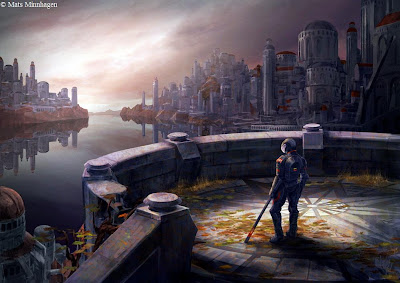 For more information and a wider portfolio please visit Mats Minnhagen's website.
© The artwork presented on this post is used with the permission of its author. All the artwork is copyrighted. Please do not use the images without the permission of the artist or owner.
Posted by Mihai A. at 10:22 AM

Hey these are great, I look forward to them all the time. Keep up the good work!

It is always a pleasure when you blog about fantasy art.

The first one on your blog with this big fish is gorgeous.

Thank you Dark Wolf. You sweetened my weekend.

Anonymous, thank you very much :)

Michael, I like the first one a lot too. And thank you very much to you too :)