Adrian Tchaikovsky made his debut last year with the first setting in the “Shadows of the Apt” series, “Empire in Black and Gold”, an interesting novel with a captivating concept (my review). This year on 6th of February TOR UK will release the second novel of Adrian Tchaikovky’s series, “Dragonfly Falling”. If I am not mistaken the fantasy lovers and the series fans will enjoy this year the third novel of the series, “Blood of the Mantis”, as well, which is due to be release on 7th of August. Until then I had the pleasure and opportunity to make an interview with Adrian Tchaikovsky.

Dark Wolf: What initial spark generated the idea of your story? And when did you decide to put that idea to paper? 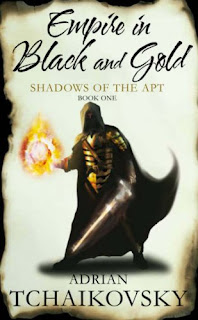 Adrian Tchaikovsky: The world of the insect-kinden has been bubbling away in the background since I first put pen to paper. I even used it as a role-playing game setting way back when I was at university. I’ve always had a fondness for insects, spiders and the like, which usually get the villain’s role in fiction. I wanted to produce a world where they were seen as, effectively, positive role models.

Dark Wolf: Did you want to make a fantasy story since the beginning or have you thought at other genres as well?
Adrian Tchaikovsky: It would probably be fashionable for me to strut my literary credentials here and explain how much of a very serious man of letters I really am, given the way the fantasy genre is so often maligned, but no: I’ve always wanted to write fantasy novels, and I’m not sure inspiration would come to me if I tried to force something else.
Dark Wolf: Do you find inspiration in other novels or fiction works? Is there an author who influenced your writing?
Adrian Tchaikovsky: I read voraciously, and I’m sure that little nuggets of writing style filter through to me subconsciously all the time. However, my first published work was in the form of some stories for the old (and sadly now defunct) Xenos magazine. After three or so had hit print I had an epiphany, and my next story, which would have been in print in the issue immediately after the poor mag went bust, was leaps and bounds better than its predecessors. The change came after I discovered Peter S. Beagle, whose use of language, especially of imagery, is exquisite and beautiful. I learned a great deal from him about what one can do with words.
DW: What difficulties did you encounter while writing your first novel, “Empire in Black and Gold”?
AT: I had the ideas, the characters, the plot and the world easily enough. Probably the biggest challenge was one of scale. Previously I had written a single volume, usually known where a sequel would take it, but tried to get that one book into print on its own. And of course the sequels never got written because nobody took on book 1. With Empire I made the decision to get several books under my belt before letting the first volume see the light of day, meaning that I would invest a great deal more time and effort into a project that might, as I thought, do no better than its predecessors. Thankfully it all paid off.
DW: I find your kinden idea, the humans possessing different insects species characteristics, original and interesting. Where did this idea come from? What researches did you make for implementing the insect characteristics to your characters?
AT: I’ve been a keen amateur entomologist since I was young, and to me (quite unscientifically) insects have always had their own character and personality. It’s baggage I’ve brought with me, rather than something I’ve had to construct specifically for the book. This sounds weird to most people, I’m sure. Think of it like this: if the book had dealt with fierce tiger-kinden, nasty hyena-kinden and cunning fox-kinden, then nobody would bat an eyelid. These are the animal achetypes our culture is familiar with. I seem to have developed my own archetypes.
DW: Do you see yourself as one of the insect-kinden presented in your novels? Would you tell me please which one it is? 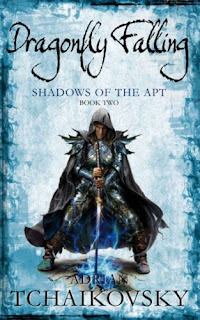 AT: Well it would be grand to be a sleek and deadly Mantis-kinden like Tisamon, but I probably rate as one of the poor bumbling Beetles.

DW: The kinden in the “Empire in Black and Gold” can reach their insect characteristics using the “meditation”, but I found this concept not entirely developed. Will you try to explore and develop this concept in the next novels?
AT: The Art of the kinden is very important to the long-term plot, and there will certainly be a greater explanation of it. However I won’t necessarily nail it down in black and white. Sometimes being too explicit about the “why” of things can rob the world of its essential appeal. It’s like a magic trick, when you know how it’s done. Part of the essential strangeness of the setting is that these Art abilities, even those as extreme as being able to fly, are absolutely normal to the insect-kinden, and not remotely “magical” (magical being something else entirely).
DW: The insects are the most diverse group of animals on Earth and if I am not mistaken there are known over one million species. How did you decide which species are best for your story? With such a wide range of possibilities will you introduce new kinden in your story or will you remain at those already created?
AT: Well you’re assuming that the series won’t run to over a million volumes, of course. My agent has said that he’ll quit when we get to boll weevil-kinden. Seriously, the kinden that appear in the stories are those insects that populate the mythscape of my own childhood most, and yes, there are many more to be introduced as the books go on. The world is vast and the kinden are many.
DW: Beside the kinden idea you came with steampunk elements in your story. With these two ideas you proved that the fantasy genre can achieve new things. Did you want to bring something new to the fantasy genre and step aside the archetypes of this genre with these ideas?
AT: You’re very kind. I wanted, and still want, to do something interesting with epic fantasy, whilst not divorcing the books from the essential features that epic-fantasy-readers look for. Hence the insects, and the artificers, but also hence a very careful selection process when it comes to the basic fantasy memes. There are a lot of worn-out tropes in fantasy, and I’ve hopefully either avoided them, or given them a new spin (and so the Empire of the Wasps is neither as simple nor as black-and-white as your standard evil empire, for example, and its emperor (introduced in Dragonfly Falling) is not the Dark Lord one might expect).
DW: On your site, Shadows of the Apt, you post a series of short stories set in the same world and building its history and the events in the novels. Do you plan to gather those stories in a separate volume or to integrate them in a future novel?
AT: I’d certainly like to have a collection of short stories, and I’m hopefully going to have some third party shorts on my site soon as well. However, the publication on paper of a shorts collection is very much beyond my control at the moment.
DW: These short stories are focused on the history of Lowlands and of your world. Do you still build your world and its history or these aspects were already created when you start writing your novels? 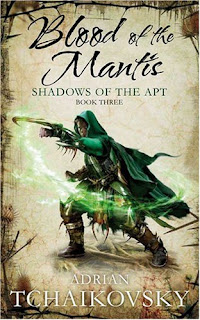 AT: The world is constantly developing, and the shorts allow me to take a look at places that the main plot hasn’t been, to show what is happening in, say, the Dragonfly Commonweal. Many of the shorts follow up from incidents mentioned in the main text, or even provide prequel-style background material. The world is constantly being added to, but the amount I knew about when I was writing the first few books is larger than those parts seen through the window those books present. There are lots of places left to visit, and the shorts allow me to do that without needless digressions in the main plot.
DW: Speaking of history of the world and as I mentioned before of the meditation process what new elements will bring your upcoming novel “Dragonfly Falling”? Would you reveal something from the upcoming novel?
AT: We get to see a lot more inside the Empire in Dragonfly Falling – especially the higher echelons of the imperial court, and a lot of what really motivates the Wasp-kinden. We also get to know some of the Lowlands kinden in more detail, including the Mantids and Spiders, but most especially the Ant-kinden.
DW: Do you plan to finish your series with the novel “Blood of the Mantis” or it will be another novel or novels in the series? Do you have a precise end in mind for your series?
AT: To let you into a secret, a few months ago I finished what now looks like it’s going to be book 6 in the series. I do have a precise end for the series, and I can promise that things will be wrapped up and that the kinden won’t end up dragging things out for the sake of it. However, the world of the kinden will still be there at the end, however marked by the events of the imperial war, and I already have a few inklings of where I may take it all afterwards, if people want me to.
DW: What are your future plans? Do you have an idea about what you’ll write after finishing the “Shadows of the Apt” series?
AT: The novel I wrote immediately before I started Empire has a lot of potential. It’s a kind of fantasy Napoleonic (although no dragons, so I’m not stepping on any toes) best described as Jane Austen meets Bernard Cornwell by way of Ursula Le Guin. I’m very fond of it, as a story, and I’d like to rewrite it a little and see it in print eventually. I have something of a hankering to write some far-future fantasy, dying earth stuff as well. For now, though, the kinden are the ones clamouring the loudest to get their story told, and so I’d better oblige them.
Adrian, thank you very much for your answers and amiability.
Posted by Mihai A. at 11:55 AM

great interview! It's a fascinating idea and I will be interested to the read the book sometime.

Thank you very much, Adele :) The book has an interesting concept.

Please apologise my belated comment. I'm totally behind with reding blog entries. At the moment 99 entries are waiting in my google reader. I spend definitely to much time at

I hope more readers will join!!


Excellent interview!
A lot of information and finally you educed interesting news from Adrian!!
Well done.

Empire in Black and Gold will be my next read.
I also sent a pre-order for
Dragonfly Falling and Blood of the Mantis

I'm glad to hear that there will be more books in the series. I love long series.
Anyway I recommend to visit The Shadows of the Apt

Michael, don't worry about it. And thank you very much :)
I hope you'll enjoy this series ;)