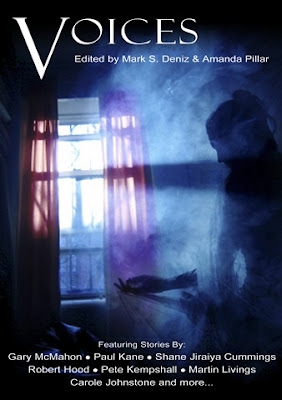 Thank you for a very detailed and thoughtful review of Voices!

I look forward to more reviews of our books in the future and I am very pleased that there are sites such as yours on the web.

Thank you very much, Mark, you are very kind :) And keep up the good work.

Thank you very much, Amanda :)

Dark Wolf, really enjoyed the way you broke down this anthology. Its nice to see you touch on every shorty short in the collection.

So many times reviewers will just say "These were my favorite stories, these were okay, these were not good" without giving much information.

Like I said before it was nice to get a taste of each story even if it was just small taste. I think I'm going to start breaking short story collections down this way for review as well.

Thanks very much for this review, very nice job.

Harrison, thank you very much :)
I believe that this is the proper way to review an anthology, because although they follow a general line each author contributes to it on its own. This time I treated some stories only briefly because they are quite short and telling to much about them it would have end up in spoiling the read.

Thank you very much, Catherine :)
That one was my favorite as well and I understood that Thomas Usher, the main character, appears in other author's stories as well. I would certainly like to read them too ;)

Mihai, this was a wonderful review and I'm putting this book onto my TBR list. I agree with the previous commenters about providing small details about each of the short stories within. That was certainly a deciding factor in wanting to get this book.

Barbara, thank you very much, you are very kind as always :D
I hope you'll enjoy this book.