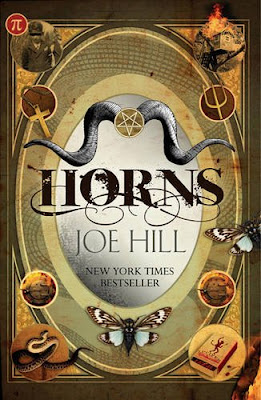 One of my favorite authors and one who will always have a special place in my heart is Stephen King. There are many other authors who join him in my preferences, although Stephen King remains my weakest spot. One of the authors who might take a place closer to Stephen King is none other than his son, Joe Hill. I read almost everything he wrote, with the exception of “20th Century Ghosts”, and with each reading I liked him more and more. On the horizon there is a new reason for Joe Hill to set himself strongly among my favorite authors, because on February 2010 Gollancz will release his new novel, “Horns”.
The blurb sounds really interesting, intriguing and based on an original idea, at least for me. Also the cover artwork of his novel looks interesting and appeals to me. The horns on the front of the cover are related to the title and the idea of the novel, but there the four corners of the cover that intrigue me the most. And together with the four elements set in the corners there is also the presence of the butterflies that make me wonder about the story within the covers. So these are quite a few motives for me to look forward for the release of Joe Hill’s “Horns”.
Ignatius Perrish spent the night drunk and doing terrible things. He woke up the next morning with one hell of a hangover, a raging headache . . . and a pair of horns growing from his temples.
Once, Ig lived the life of the blessed: born into privilege, the second son of a renowned American musician, and the younger brother of a rising late-night TV star, Ig had security and wealth and a place in his community. Ig had it all, and more - he had the love of Merrin Williams, a love founded on shared daydreams, mutual daring, and unlikely midsummer magic.
Then beautiful, vivacious Merrin was gone - raped and murdered, under inexplicable circumstances - with Ig the only suspect. He was never tried for the crime, but in the court of public opinion, Ig was and always would be guilty.
Now Ig is possessed with a terrible new power to go with his terrible new look, and he means to use it to find the man who killed Merrin and destroyed his life. Being good and praying for the best got him nowhere. It's time for a little revenge; it's time the devil had his due.
Posted by Mihai A. at 12:12 PM

That is a very cool cover. And I for one have been known to buy books purely on the basis that I love the cover art....

I also bought books based only on the cover art. This time however Joe Hill is the first reason for me buying a copy of the novel :)

That's a pretty cover, I'll say that much. And the premise for the story has my ears perked too. And Joe Hill is Stephen King's son? Did not know that. That's what I get for not bothering to learn about the background of authors.

Leaving the fact that he is Stephen King's son, Joe Hill deserves praise for his own works, because those I read proved to be good and Hill a talented writer. I can't wait to see this one :)