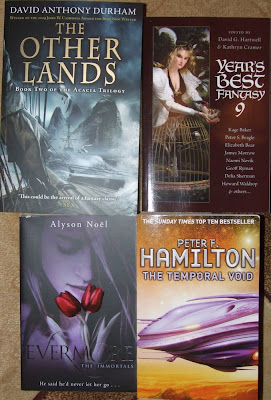 Here is a new post about the latest arrivals in my mailbox, with my thanks for their senders:
- "The Other Lands" by David Anthony Durham (through the courtesy of Transworld Books);
The Other Lands begins a few years after Acacia, and Queen Corinn Akaran is firmly in control of the Known World. Her primary goal is to topple the Lothan Aklun and so she sends her brother Daniel, disguised as a slave, on an exploratory expedition to the Other Lands.
Daniel soon discovers a mainland that is a more lush, exotic, and expansive than the Known World; and the ruling tribe, the Auldek, are more numerous and powerful than the Numrek. But unbeknownst to the Corinn and her siblings, the Numrek and Auldek are ancient ancestors and their inevitable alliance could mean the downfall of Acacia.
In this bold and imaginative sequel to Acacia, Queen Corinn must unite the battered and abused peoples of the Acacia Empire against the powerful tribes of the Other Lands.
- "Year's Best Fantasy 9" edited by David G. Hartwell and Kathryn Cramer (through the courtesy of Tor.com);
- "The Immortals: Evermore" by Alyson Noël (through the courtesy of Pan Macmillan);
Seventeen-year-old Ever is the sole survivor of a car crash that killed her entire family. Living with her aunt in Southern California, she's plagued by the ability to hear the thoughts of those around her, and haunted by the ghost of her little sister. She tries to tune everyone out, shunning her old lifestyle as the pretty, popular cheerleader, but somehow she can't hide from Damen, the new guy at school. Stunningly handsome, clever and not a little bit intimidating, there's something about him that doesn't quite add up. Ever realises he's hiding something, but nothing could prepare her for the truth - especially when the truth involves past lives, murderous enemies, everlasting love and the secret of eternal youth . . .
- "The Temporal Void" by Peter F. Hamilton (through the courtesy of Pan Macmillan).
The Intersolar Commonwealth is in turmoil as the Living Dream’s deadline for launching its Pilgrimage into the Void draws closer. Not only is the Ocisen Empire fleet fast approaching on a mission of genocide, but also an internecine war has broken out between the post-human factions over the destiny of humanity.
Countering the various and increasingly desperate agents and factions is Paula Myo, a ruthlessly single-minded investigator, beset by foes from her distant past and colleagues of dubious allegiance...but she is fast losing a race against time.
At the heart of all this is Edeard the Waterwalker, who once lived a long time ago deep inside the Void. He is the messiah of Living Dream, and visions of his life are shared by, and inspire billions of humans. It is his glorious, captivating story that is the driving force behind Living Dream’s Pilgrimage, a force that is too strong to be thwarted. As Edeard nears his final victory the true nature of the Void is finally revealed.
Thank you all very much!
Posted by Mihai A. at 12:19 PM

The Immortals: Evermore sounds like it would be an interesting read. I look forward to your review, Mihai.

I look forward to the release date of The Other Lands paperback. I really enjoyed to read Acacia.

Barbara, unfortunately that title works the least for me :)