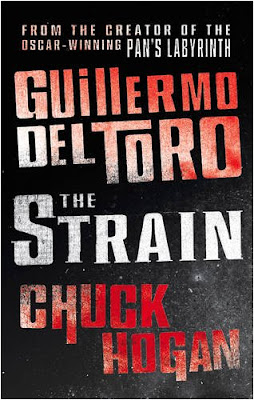 "The Strain"
by Guillermo del Toro & Chuck Hogan
Format: Hardcover, 401 pages
Publisher: HarperCollins UK
Review copy received through the courtesy of the publisher, HarperCollins UK
A plane lands at JFK and mysteriously ‘goes dark’, stopping in the middle of the runway for no apparent reason, all lights off, all doors sealed. The pilots cannot be raised. When the hatch above the wing finally clicks open, it soon becomes clear that everyone on board is dead – although there is no sign of any trauma or struggle. Ephraim Goodweather and his team from the Center for Disease Control must work quickly to establish the cause of this strange occurrence before panic spreads. The first thing they discover is that four of the victims are actually still alive. But that’s the only good news. And when all two hundred corpses disappear from various morgues around the city on the same night, things very rapidly get worse. Soon Eph and a small band of helpers will find themselves battling to protect not only their own loved ones, but the whole city, against an ancient threat to humanity.
I make no secret that two of the movies I enjoyed the most lately, “Pan’s Labyrinth” and “The Orphanage”, are linked to Guillermo del Toro, both produced by him and with the first one also directed by del Toro. So when I saw that Guillermo del Toro will collaborate with Chuck Hogan for the novel “The Strain” I was very curious to see his exploration of written fiction.
I can’t say that I read much vampire fiction and if I am honest I have to say that if it comes to a choice in reading the vampires are not winning very often. But they win from time to time, with “The Strain” is such a winner although not necessarily because of this reason, and I’ll start by saying that I enjoyed Guillermo del Toro and Chuck Hogan’s novel. What I find most appealing to me is that this novel doesn’t use the stereotypes of vampire fiction and I really liked how the authors worked on this myth. They blend old elements with the new ones creating a fresh and powerful image of the vampires. I liked how the authors mix the old and the new anchoring some of the vampires’ facts into our everyday reality and I refer here to our world’s fear of biological war and to the viruses that are spreading around it.
“The Strain” is an entertaining reading, with a lot of action and with a steady pace. The events of the novel are taking place throughout three days and because of this the novel will move in a fast rhythm. Guillermo del Toro and Chuck Hogan create tension and suspence and manage to keep them throughout the novel, also keeping the reader on edge. The novel doesn’t fault at this chapter and it successfully succeeds to create a thrilling reading. The characters of “The Strain” are interesting and I ended up liking some of them. Unfortunately that is not the case with the main one. Although Ephraim Goodweather plays the most important role in the story, I could not connect with him at all. Instead I ended up liking Abraham Setrakian and Vasily Fet, although Fet is only introduced at the half of the novel. There are elements in the personal history of these two characters that made them interesting to me, but unfortunately I found these elements not explored to their fullest.
However, there are a few things that didn’t work for me in the fullest. First of all there are a few clichés that will seem reaped from the Hollywood action movies. For instance, I would have dropped from the novel the fact that Ephraim Goodweather ends up compromised in face of his superior and is suspended from his position. I believe that this fact could have been pulled in a different way without using a cliché that I personally do not want to see in the movies, so much more in the fiction I read. Another thing is that in some places the things and actions present in “The Strain” are explained in the smallest detail. Although these explanations are not breaking the pace of the novel too much, they sound too much as lecture and less than a part of the story.
“The Strain” is the first novel in a trilogy and therefore some of the novel’s aspects are left unresolved. I can’t say that “The Strain” changed my perception of vampire’s fiction, but it offered me a fun, entertaining and relaxing reading and the Guillermo del Toro and Chuck Hogan’s novel picked my interest for the next follow-ups as well, so I would be curious to see how the story develops further on.
Posted by Mihai A. at 12:02 PM

I enjoyed reading this book and thought that those first few chapters were some of the creepiest I'd ever read.

I love the way del Toro used his film making background to structure this book - I think it could be turned into a film with out changing anything.

The last few chapters were a bit disappointing to me, and I'm not sure I'll enjoy the rest of the trilogy, but I look forward to finding out where he takes the plot.

Good review! I like your review as you share my opinion about vampires. So when you like this book I know I will like too.
My wife and I want to read The Strain. But we haven't decided yet whether to buy the hardcover - which we normally don't do - or wait for paperback which will be published in April 2010.

A very good review. I'll have to add a link to this to mine.

I quite liked the book, myself. And share your hangups with the cliched aspects of the story. Ultimately, it was a good thrill ride. I just hope the two sequels make par.

Jackie, I think that this novel will be easy to adapt in a movie. And with the talent of del Toro I would be curious to see how it turns out if they will make one sometime in the future :)

Michael, I usually go for the paperback too, although I like the hardcover editions a lot :)

Rabid Fox, I hope so too. This was a thrilling reading and I hope that the next two novels will be at least as fun as this one :)