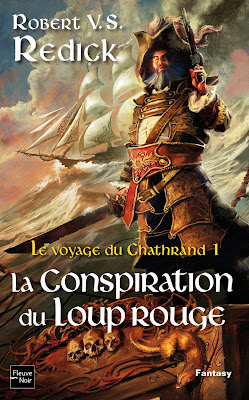 I always find interesting the comparisons made on the US and UK cover artwork for the same novel and I have to say that most of the times I prefer the UK covers to the detriment of the US ones. One of such cases, but still not exactly relevant, is the cover artwork for the Robert V.S. Redick’s debut novel, “The Red Wolf Conspiracy”. I say not exactly relevant because although I do prefer more the UK cover artwork made for the Gollancz edition I do not find the US cover made for the Del Rey edition bad or far behind the UK one, I find both of them interesting but with a plus for the UK cover artwork. But recently I’ve seen another very interesting cover which benefits from a very good artwork. It is the cover artwork made for the French edition of the Robert V.S. Redick’s “The Red Wolf Conspiracy”, “La Conspiration du Loup Rouge”, published by Fleuve Noir and made by the talented French artist, Jean-Sébastien Rossbach.
Posted by Mihai A. at 12:11 PM

I like that cover. I loved the UK cover and thought the US cover was alright but just didn't work for me. Maybe if I hadn't seen the UK one I'd have enjoyed it a lot more

Cindy, I think the same. Maybe if I saw the US cover first I would have liked it more. Still the UK one is the best :)