Premio Minotauro is an international science fiction, fantasy and horror award offered to the best unpublished novel by a Spanish or Latin American author. The award is organized by the Ediciones Minotauro, a publishing house with more than 55 years of experience on the Spanish speculative fiction market. Premio Minotauro is awarded by a jury of seven persons chosen by the publishers, consists in a prize of 10,000 euro and the respective novel being published by Ediciones Minotauro. The award is at its 9th edition and the previous eight winners are:

This year, the jury of Premio Minotauro was formed by Montse de Paz, the winner of the previous edition, Fernando Delgado, Juan Eslava Galán, Laura Falcó, Ángela Vallvey and José López Jara as secretary and it took into consideration 227 manuscripts. The winner was chosen from a list of 5 finalists and announced in a ceremony held in Madrid, Spain, on 9th of February. The 2012 Premio Minotauro was awarded to “La Torre Prohibida” (The Forbidden Tower) by David Zurdo and Ángel Gutiérrez. 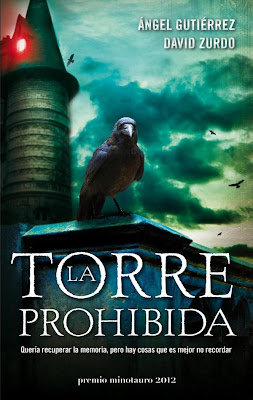 The winner of the 2012 Premio Minotauro is a horror novel with an unexpected finish. After suffering an accident that almost ended his life and led to a total loss of memory Jack Winger is admitted in a nursing home to recover from the serious consequences of the accident. Jack Winger is an investigation journalist who has no visits in hospital where all the patients suffer from amnesia. What nobody speaks of is that all the patients suffer from recurring nightmares, terrible dreams that are repeating every night. Also that sometimes the head nurse takes a patient to the nearby woods but returns alone or that there is a tower with its entrance hidden and that no one is allowed to enter…
With the help of Julia, a young patient whose nightmare seems more terrible than his, Jack discovers that are places that is better not to enter and that some secrets are better left uncovered. “The Forbidden Tower” is a horror novel with a suffocating atmosphere and such an unexpected finish that would leave its readers with their mouth opened. David Zurdo and Ángel Gutiérrez have succeeded to create a novel that entraps the reader from its first page.

Congratulations! And hopefully we would see this novel translated in English (and not only) too!