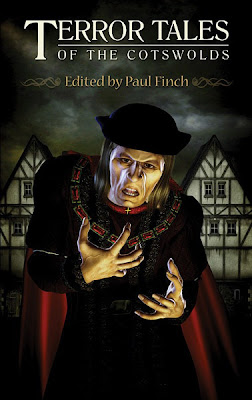 The Cotswolds – land of green fields, manor houses and thatched-roof villages, where the screams of ancient massacres linger in the leafy woods, faeries weave sadistic spells, and pagan gods stir beneath the moonlit hills …

The flesh-eating fiend of St. John’s
The vengeful spirit of Little Lawford
The satanic murders at Meon Hill
The ghastly mutilation at Wychavon
The demon dancers of Warwick
The cannibal feast at Alvington
The twisted revenant of Stratford-upon-Avon

“In The Quiet And In The Dark” by Alison Littlewood
Fury From Beyond
“Straw Babies” by Gary McMahon
A Bizarre and Terrible Event
“Charm” by Reggie Oliver
The Grimmest Castle in All England
“Hoxlip And After” by Christopher Harman
The Undead Who Wander The Wye
“The Shakespeare Curse” by Simon Clark
Oxford’s Black Assize
“The Scouring” by Thana Niveau
The Cannibal Feast
“Wassailing” by Steve Lockley
Bloodbath Under A Spectral Sun
“The Silent Dance” by Joel Lane
What Walks In Ettington Park?
“Waiting For Nicky” by Antonia James
The Satanic Slayings at Meon Hill
“The Horror Under Warrendown” by Ramsey Campbell
Worcester’s Most Odious Relic
“The Lurker” by Gary Fry
The Beast of St. John’s
“The Cotswold Olimpicks” by Simon Kurt Unsworth
God’s Dire Warning
“A Taste of Honey, A Horror of Stone” by John Llewellyn Probert
Lovell’s Long Wait
“Bog Man” by Paul Finch