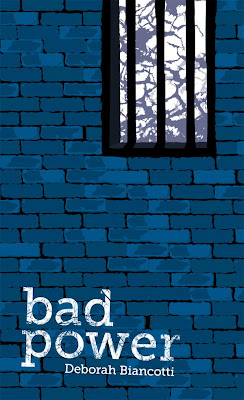 "Bad Power"
by Deborah Biancotti
Publisher: Twelfth Planet Press
The review is based on bought copy of the book
Hate superheroes?
Yeah. They probably hate you, too.
‘There are two kinds of people with lawyers on tap, Mr Grey. The powerful and the corrupt.’
‘Thank you.’
‘For implying you’re powerful?’
‘For imagining those are two different groups.’
From Crawford Award nominee Deborah Biancotti comes this sinister short story suite, a pocketbook police procedural, set in a world where the victories are only relative, and the defeats are absolute. Bad Power celebrates the worst kind of powers both supernatural and otherwise, in the interlinked tales of five people — and how far they’ll go.
If you like Haven and Heroes, you’ll love Bad Power.
Superheroes and supernatural powers are a very common thing nowadays, with plenty of comic books, movies and books focused on one or more figures with uncommon abilities, it is almost impossible to not have heard of at least one. However, most of these superheroes tend to be shallow figures, hidden behind a disguise that wears itself very thin on a closer inspection, the human element that lies beneath their supernatural powers is missed almost completely. Deborah Biancotti tackles this issue in her latest collection of short stories, “Bad Power”.
Deborah Biancotti’s collection consists of five stories interdependent with each other, but that can also be read independently without any difficulty. However, I do believe that “Bad Power” is much better treated a single story with multiple points of view and repays the reader more if approached as one solid product. The five stories bridge each other, mainly through characters, but also through intrigue. “Shades of Grey” has the longest grip, reaching its grasp until the last story, but also introduces Detective Enora Palmer who investigates a case of harassing in “Palming the Lady”. The subject of harassment, Matthew Webb, is the protagonist of “Web of Lies”, but the previous story holds a key of Matthew’s future of which only the reader is aware of. “Bad Power” has a slender connection with “Web of Lies”, but a deeper and meaningful one with the next, “Cross the Bridge”. Five different tales, five different characters, but read them as one single story and “Bad Power” will reveal new layers.
The stories are bridged together, but there are other connections within the stories as well. Links between the main characters and the titles of the stories, “Shades of Grey” the story of Esser Grey, “Palming the Lady” of Detective Enora Palmer, “Web of Lies” of Matthew Webb, “Bad Power” of the character who names herself Bad and “Cross the Bridge” of Maxillius Ponti, his surname meaning bridges in Italian. Not only the characters have a close correlation with the titles, their supernatural abilities share the same correspondence, dissecting the meaning of the stories for new implications that earn new and delightful prizes to the reader. Deborah Biancotti masters these connections playing wonderfully with words, skillfully mastering the language and tone. She even makes a small display of force with “Bad Power”, a story that digresses from the other four in time and tonality, but integrates admirably with the rest. And following the order of stories set by Deborah Biancotti will bring the best out of “Bad Power”.
What I loved the most at Deborah Biancotti’s “Bad Power”, however, is that no superheroes make their presence felt within their pages, only humans with supernatural abilities. The way the characters of the stories come in possession of their powers holds no importance, what matters is the impact these abilities have on their lives, the new implications and emotions the new discovered potentials bring. Flawed and insecure reactions, satisfactions and frustrations, all present the unbreakable link between the supernatural power and the human who holds it. For these reasons all the five characters are very strong, with very engaging stories, but I do like Maxillius Ponti more. For me he was the most emotional one and his story a little more sensible.
After finishing “Bad Power” I am afraid I will not look the same upon superheroes, but then again, it is not very different situation than before. I have always looked for the human behind the superhero, but I was always left deeply unsatisfied by the answers found. It is not the case with “Bad Power”, because Deborah Biancotti’s main concern with the human rather than the superpower finally brought the response I was craving for. For all these and something more I ardently recommend Deborah Biancotti’s “Bad Power”.
Posted by Mihai A. at 12:30 PM

Mwahahahaaa! I mean, thanks for the review. :)

It is my pleasure! Thank you for a wonderful book :)