"A Cold Season" by Alison Littlewood 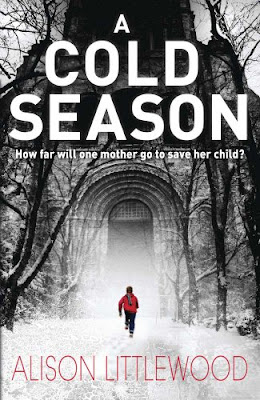 "A Cold Season"
by Alison Littlewood
Publisher: Jo Fletcher Books
The review is based on a bought copy of the book
Cass is building a new life for herself and her young son Ben after the death of her soldier husband Pete, returning to the village where she lived as a child. But their idyllic new home is not what she expected: the other flats are all empty, there's strange graffiti on the walls, and the villagers are a bit odd. And when an unexpectedly heavy snowstorm maroons the village, things get even harder. Ben is changing, he's surly and aggressive and Cass's only confidant is the smooth, charming Theodore Remick, the stand-in headmaster. Not everyone approves of Cass's growing closeness to Mr Remick, and it soon becomes obvious he's not all he appears to be either. If she is to protect her beloved son, Cass is going to have to fight back. Cass realises this is not the first time her family have been targeted by Theodore Remick. But this time, the stakes are immeasurably higher...
Quality short fiction brings many benefits to the reader, especially by rendering a condensed story that resolves the plot in a shorter and tighter amount of space, but with equal or greater efficiency than its longer relative. But what I love the most about short fiction is the opportunity it gives for discovering new writers. One such chance emerged with three short stories published in the excellent magazine, Black Static, “The Empty Spaces”, “Black Feathers” and “About the Dark”, three fiction pieces that led to my discovery of Alison Littlewood. Only naturally I followed my curiosity and interest in the work of Alison Littlewood when her debut novel, “A Cold Season”, was released at the beginning of this year.
Cass and Ben try to recover from the disappearance of Pete, Cass’ husband and Ben’s father, by trying to start again in a new place, the charming village of Darnshaw. Not only Cass and Ben will settle in their new home, but heavy winter will start making room for itself on the peaceful village, so much that Darnshaw becomes isolated, cutting completely all the inhabitants from the rest of world. The sense of complete seclusion is one of the main keys of “A Cold Season”, masterfully played by Alison Littlewood to an almost perfection. From the beginning of the novel, when Cass drives in heavy fog, and through the constant falling snow that not only that rips Cass and Ben from the rest of the world, but also limits their movements locally an atmosphere of entrapment and discomfort gathers momentum. The solitude of Cass and Ben is made more poignant by a very small cast of characters, be them major, minor or with only a fleeting presence.
The atmosphere becomes heavy not only through the external factors of the protagonists’ isolation, but also by the exposure of the internal elements conceived by Cass’ feelings and emotions. Disoriented and insecure, shaken by recent events and remerging memories of her past, partially lived in the same location of Darnshaw, Cass is just one small step from overwhelming panic. And panic hits Cass in an exploding end, carefully driven and twisted by Alison Littlewood. There are elements in the way Alison Littlewood expresses some of “A Cold Season” events that insinuate one of the final twists. Still, that particular turn holds plenty of emotion to give it value, if not to be surprising in the fullest. Also, supernatural elements make their presence felt from the beginning of “A Cold Season” and converge with the final spins to a maximum effect. Not only that, but Alison Littlewood has in storage an ultimate conflict that is specifically abruptly concluded, only to give the final chapter even more meaning and to extend the story past its actual end.
There are a couple of questions I asked myself while reading “A Cold Season” that seem to have no answer. Or at least an obvious one. I wonder why there is a confusion with the number of the apartment where Cass and Ben live, with a correspondence wrongfully delivered. And what is the specific purpose of the Cass’ working files being corrupted. Also, there is a connection in the final conflict between the negative character and the presence of Cass’ husband in Afghanistan that seems overstretched, it feels like too much of an effort for a potential and still uncertain outcome. I would have left that particular involvement out and stayed close to the randomness of the event. I would also have liked to see the story a bit more from Ben’s points of view, mostly because some of his wishes and desires are played in the plot. But all these issues look more like concerns of a grumpy old man picking on anything for the sake of one more grumbling, rather than serious obstacles in the development of the story.
Alison Littlewood uses old flavors with a fresh and personal approach to brew a story both sensible and terrifying at the same time. The difference between Alison Littlewood’s short stories I read and “A Cold Season” is that her voice grew stronger and more confident, which for certain would make itself heard even more in the future.
Posted by Mihai A. at 12:30 PM