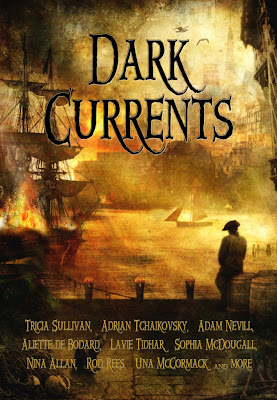 I am vaguely familiar with the dark current concept in physics and chemistry, but these classes were hardly my favorites. As a matter of fact I always preferred a good novel over the homework for these classes, or even the classes themselves when it was possible. After all these years though, it looks like dark current can incite my interest and raise its head from underneath the stack of books gathered on top of it. Only because NewCon Press gave it the form suited for my preferences, respectively an anthology of speculative fiction. “Dark Currents” is a collection of stories based on the two words and the ideas brought to life by them from the writers’ inspiration. 16 authors offered their metamorphoses of the two words in a story, but I have to say that I am not very familiar with many of the writers or works. From the line-up the main point of attraction for me is Aliette de Bodard, who proved to be a very talented and imaginative writer in both long and short forms of fiction. I am aware and enjoyed some of Lavie Tidhar, Adam Nevill and Adrian Tchaikovsky’s works, but otherwise the authors featured on “Dark Currents” line-up are either a mystery to me or I never tried any of their writings. That is hardly a point in disfavor of “Dark Currents”. On the contrary, triggered by the anthology’s presentation and Aliette de Bodard’s presence on the table of contents my curiosity is fuelled further by the possible discovery of new interesting writers. All right, add to all these the complimentary cover artwork by Ben Baldwin. “Dark Currents” will be officially launched at Eastercon in April .

A return to NewCon Press’ tradition of offering an exciting blend of science fiction, fantasy, dark fantasy and horror; a set of stories that traverses genre boundaries, linked only by their common source of inspiration. Contributors were given just those two words: ‘Dark Currents’ and then asked to write whatever story the phrase inspired. The result is a dazzling blend of exciting fictions, from haunted seascapes to distant starscapes, from reality-hopping soldiers in a surreal war to naval battles in the ether, from the deeply poignant to breathless excitement and back again, delving into the very undercurrents of life… come and immerse yourself in the depths of Dark Currents.

“Introduction” by Ian Whates
“The Fall of Lady Sealight” by Adrian Tchaikovsky
“The Age of Entitlement” by Adam Nevill
“Electrify Me” by Tricia Sullivan
“Alternate Currents” by Rod Rees
“The Barricade” by Nina Allan
“Things that Are Here Now” by Andrew Hook
“Loose Connections” by Finn Clarke
“Sleepless in R’lyeh” by Lavie Tidhar
“Damnation Seize my Soul” by Jan Edwards
“Home” by Emma Coleman
“A Change in the Weather” by Rebecca J Payne
“Bells Ringing Under the Sea” by Sophia McDougall
“In Tauris” by Una McCormack
“Lost Sheep” by Neil Williamson
“The Bleeding Man” by Aliette de Bodard
“George” by V.C. Linde

I'm not really a short story fan, but between the description and the cover, I'm loving this already.

It looks really good. I am looking forward to read it :)