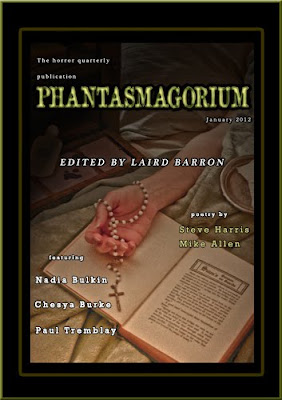 Phantasmagorium #2
edited by Laird Barron
The review is based on a bought copy of the magazine
To advertise a new short fiction magazine can prove to be tricky. Nowadays there is plenty of material to be found, both in print and online, so a new such magazine needs interesting elements to attract readership. The first thing that attracted me at “Phantasmagorium” was its editor, Laird Barron. Since his short stories are something that I cannot easily forget, stories I first read on my favorite yearly collections such as “The Year’s Best Fantasy and Horror” and “The Best Horror of the Year” and then in Laird Barron’s two personal collections, “The Imago Sequence” and “Occultation”, I was very curious to see Laird Barron transit from the talented writer to the editor position in the case of “Phantasmagorium”. The second thing was the presence of Paul Tremblay on the second issue’s line-up of stories. Paul Tremblay’s presence on the magazine it’s the second thing that advertise “Phantasmagorium” to me because I discovered it on its second issue, but nonetheless made me curious since Paul Tremblay’s “The Little Sleep” was a truly an interesting ride for me. With these in mind there was only one thing left for me to do and that was to experience “Phantasmagorium” on the first hand.
The magazine contains three short stories and two poems. I am not very familiar with poetry, I read and continue to read poems, but only occasionally at best, so I cannot say that I have a lot of experience with it. Still, “Having Sex with Sylvia Plath” by Steve Harris didn’t do much for me, while Mike Allen’s “Budding” proved to be another species entirely. Steve Harris’ “Having Sex with Sylvia Plath” associates the intimate act with a series of visions, some of them interesting, some a little uncomfortable. Especially, when it is something similar with Prometheus’ ordeal. Mike Allen’s “Budding” is a very short poem, but inversely proportional in quality to its length. It has some very beautiful and unsettling verses.
“Endless Life” by Nadia Bulkin – General Jon Henry Fest, a ruthless and bloody dictator, committed suicide in a hotel room, but when tourists and TV shows come in search of thrills to this room they will discover the haunting ghost of Melanie, a hotel maid who died in the same place. My country experienced in its recent history the overthrown of a dictatorial figure through a bloody revolution and although these are very different events Nadia Bulkin’s story contains plenty of similarities with our past and present to ring very true for me. “Endless Life” approaches the human existence under such governance from the perspective of the ruler, but especially from that of the people. Also history plays an important part in the story, with the past becoming distorted with the passing of time, from people starting to forget the horrible events to the newer generation that see them as mere entries in the history books.
“Almost, Majic Man, Posters and Doors that Never Lock” by Chesya Burke – In a small town a strange pandemic breaks loose raising the small community to high psychosis levels. The story will not reveal its every facet, there are layers that remain unreachable to a point. That is what makes Chesya Burke’s story a personal experience for every reader. Also, the end of the story will bring the fear that brought hysteria to the small town on a new level, while at the same time opens a new and surprising dimension for the main character.
“House of Windows” by Paul Tremblay – Overnight a new building appears next to the public library and after some time it begins to grow on its own while in other places around the city similar buildings spring forth. “House of Windows” is a weird story full of deeper meanings. It is an urban and social comment in which lines and boundaries begin to blur and disappear. Very much the same with things from our modern society that seem to grow on their own accord, only they are not as visible as the one in Paul Tremblay’s story.
Despite reading “Phantasmagorium” almost breathlessly I did have a problem with this new magazine. Just above its title can be found “The Horror quarterly publication” statement, but that buries plenty of very good things under a label that lately proves to become more and more a misconception. The horror label drives readers away although it stretched its limits of inflicting terror just for fear or shock sake. That is why I regret “Phantasmagorium” cover statement, because the issue I read will not cause horror to any reader through shocking images, but instead will offer plenty of reasons for reflection and thought. I do know that it still nudges and probes my mind.
Posted by Mihai A. at 12:30 PM