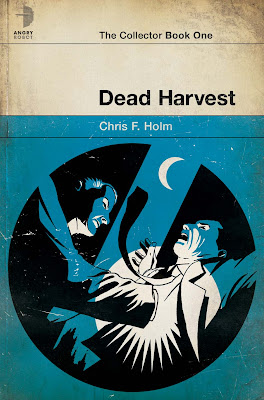 "Dead Harvest"
by Chris F. Holm
Publisher: Angry Robot Books
Review copy received through the courtesy of the publisher, Angry Robot Books
Meet Sam Thornton. He collects souls.
Sam’s job is to collect the souls of the damned, and ensure they are dispatched to the appropriate destination. But when he’s sent to collect the soul of a young woman he believes to be innocent of the horrific crime that’s doomed her to Hell, he says something no Collector has ever said before.
“No.”
“You should not judge a book by its cover” is one of the most common expressions I know, but in plenty of times it proved to be correct as it was false. And when there is little else information at hand when I discover an unknown author or title for me the first thing to refer to is the cover artwork. That was the case with “Dead Harvest”, the debut novel of Chris F. Holm, which came into my attention through a classic looking, but a very attractive cover artwork.
The cover artwork was the starting point of my interest in Chris F. Holm’s novel, but nostalgia is the main reason for building that interest from a spark to a bonfire. When Dashiell Hammet and Raymond Chandler are being mentioned, as they were in the presentation of the “Dead Harvest” cover, and the respective book cover looks reaped from some of those classical noir novels memories come flooding in. I grew up following breathlessly the adventures of Sam Spade and Philip Marlowe and since Sam Thornton promised to be in the same line I was convinced.
However, Sam Thornton is no Sam Spade or Philip Marlowe and any comparison would not be fair. For Sam Thornton, who is quite a character on his own. Hardboiled soul collector, Sam Thornton has all the wrong connections and is not what can be called an extremely likeable character at first. By the end of his adventure Sam will get under the readers skin though. Smoking his way there! Because Sam Thornton has no consideration for the constantly growing smoke free environment or for any of his bodies and will scorch cigarette after cigarette. That is about the only constant characterization of Sam Thornton, because his physical description would be very difficult to pinpoint. Sam Thornton is dead, for quite a while as a matter of fact, and he fulfills his soul collecting missions by possessing different bodies, dead or alive.
But the last mission Sam Thornton is sent doesn’t seem exactly right and makes a kick to his conscience. And from this point forward Sam Thornton will embark in a maximum thrill ride, full action, chasing and violence. While at the same time he tries to figure what is wrong with the last collecting he had to make. Nothing is clearly revealed in the bustled soaked pages of “Dead Harvest” until the final scene when the entire scheme is disclosed. Until then, the reader must be prepared for running, shooting, driving, flying and fighting, on, above and underground. All assorted with supernatural accessories. There are plenty of opportunities for the catching of breath, especially through frequently travels into Sam Thornton’s past. And as much as I liked the action scenes, those were my favorite moments of Chris F. Holm’s novel. The history behind Sam Thornton recruitment in the soul collectors’ ranks always left me eagerly waiting for the next fragment, enough being said and revealed for my curiosity to remain constant and die until the following installment of the journey in the past.
Still, despite the moments when “Dead Harvest” slows down to allow air being inhaled at normal intervals I was left a bit panting. The action scenes are very good, but I would have liked to see Sam Thornton’s investigation following more the intellectual course rather than the physical one. I liked that Chris F. Holm kept a mystery and insecurity behind Sam’s actions, until the end of the novel I was not sure if he was right or wrong, but the finality of the story comes a little out of nowhere. I am not sure if I have missed some of the clues Chris F. Holm left throughout his novel, but for me the final answer came too sudden and lacking full support. It is a logical choice in the grand scheme, but there is no much that leads to it. There is a constant threat of a starting apocalypse until we reach this end though and this is another my complaints. Sam’s choice and actions might lead to the world’s end, but that is reminded too often for my liking. A bit too much the reader is reminded that everything might collapse without Sam Thornton collecting the designated soul and I would have left a few such mentions out, because they more quickly might turn into annoyance than coming in handy.
“Dead Harvest” has a couple of shortcomings, but in spite of them it is a very nice novella and in its case I am happy that I followed the lead left by the book cover, because the result was rewarding. And since I mentioned Sam Spade and Humphrey Bogart is most commonly associated with the said detective I have only one more thing to say to Chris F. Holm and his character, Sam Thornton, “I think this is the beginning of a beautiful friendship”.
Posted by Mihai A. at 1:00 PM