"The Crystal Skull" by Manda Scott 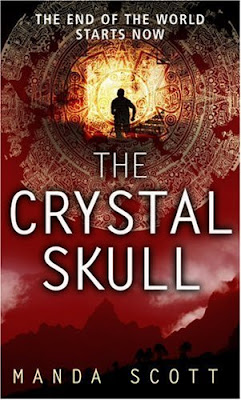 "The Crystal Skull"
by Manda Scott
Format: Paperback, 544 pages
Publisher: Bantam Books
Sometimes I feel I have to change a little the registry of my reading and go with other genre than fantasy, science-fiction and horror. Manda Scott's "The Crystal Skull" helped me do this different reading.
The novel follows two main characters and their two storylines, separated by a little over 400 years, but connected through time by a relic, a blue stone skull, and by a prophecy, that the end of the world will come at 21.12.2012. The first character, Cedric Owen, a physician, Master of Arts and doctor of philosophy, inherited the blue stone skull from his grandmother and he has to flee England because of the threat of Inquisition. He finds out that he has to travel to New Spain to learn about the past, the present and the future of the blue stone skull and he has to hide and protect it so that only the proper wielder of the stone to find it in the future. The second character, Stella Cody, an astro-physicist and a passionate caver, finds the blue stone skull after 419 years with the help of her husband and after they cracked the codes left by Cedric Owen. She learns that the future of the world lies in her hands and in the use of the blue stone skull.
Manda Scott manages to successfully blend the two stories and to create a compact tale. I liked mostly the story that takes part in the past, because the author manages to create a credible atmosphere of that time and also to make very good descriptions of the places present in the story, like Paris or New Spain. I found the characters of this storyline more of my taste, beside Cedric Owen, Fernandez de Aguilar being an interesting character. Also Manda Scott manages to sustain the suspense until the end and to have some interesting twists and turns at the end of the novel.
I found the characters from modern day part a little flat and simple. Also I think the pace of the novel in this part is a little too slow and the tension a little weak. But the author recovers this weak points in the final part of the novel, where the pace and suspense are well build and keeps you turning the pages.
Overall I found in "The Crystal Skull" a fun and relaxing read and I will certainly look for Manda Scott's "Boudica" books because I enjoyed the historical fiction made by the author in this novel.
Posted by Mihai A. at 12:12 PM

Well anyways what genre is this. I mean it's not fantasy, but seems to be something in the paranormal obscure line. Of course it can be something along the spectrum of the "DaVinchi Code". I am interested in this. The cover is really cool.

Is a thriller and you're right it is in the spectrum of "Da Vinci Code" :)

I'm so intuitive, when it comes to that! Sounds so good.

PS: These graphics in order to post comments are twisting way too much. I need new pair of eyes!

I'm glad you reviewed this Mihai :) It was in my review pile and I was planning on reading it, but I'm just so far behind, I had to skip it. So it's good to know that it's worth the effort and I'll definitely revisit the book when I have more time...

Robert I'm glad I could help you with my review ;)