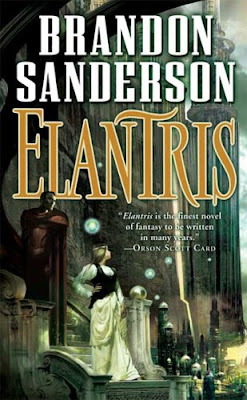 In the city of Elantris lived a race of demigods with great skills in magic and they protected the kingdom of Arelon and especially its capital, Kae. They were transformed by Shaod, a process that magically transformed humans in elantrians despite their social condition, and enjoyed a good life and respect. Until ten years ago, when an event changes the blessings of Elantris in a curse and Shaod changes people into some wretches affected by hunger and constant pain. After this event the merchants took control of the country and initiate a monarchy controled by the wealthier of them. After this ten years, Arelon and the kingdom of Teod are threaten by Fjordell, a powerful theocratic nation with an expansionist desire, and they seek an alliance through the marriage of the prince of Arelon and the princess of Teod. But Prince Raoden is taken by Shaod and thrown in Elantris as is the tradition and Sarene, his fiancee, arrives in Kae finding herself a widow. Sarene tries anyway to save the two kingdoms from the threat of Fjordell and when in Kae arrives Hrathen, a great priest from Fjordell with the mission to convert the kingdom of Arelon to his religion, her mission becomes more difficult.

The story is presented through the point of view of the three main characters and this makes it interesting for the reader, because always he knows more than the three characters as an individual. The characters are entertaining and I found myself interested of their future and tied to their destiny. Prince Raoden tries to find out what has destroyed Elantris and why the old magic doesn't work anymore. Princess Sarene tries to save Arelon of the threat of Fjordell, but also tries to save the kingdom of his own monarchy and political system. Hrathen, and this character is the one I enjoyed the most, found himself with doubts and questions over his religion when he tries to complete his mission. I love this character because has more depth than the other two, has a history and a childhood behind and has interesting inner conflicts.

I think that the magic system and the worldbuilding are the strong points of this novel. The magic is created with the help of Aons, letters of light and power, known only by the elantrians. Brandon Sanderson describes the magic of Elantris with care and the hole system is logic. The religion is also created with care and logic, and this part has the conflict of the two major doctrines, Shu-Dereth and Shu-Korath. The religion resembles a little medieval christianism, with a schism, resulting two doctrines that have similarities and conflicts. The author also creates very well the city of Elantris, with great details and accuracy.

On the other hand the prose is the weak point of the novel. Although is paced well and is simple, helping the reader, I found some dissapointing things. Sometimes the scenes seem to come from nowhere with no proper background and also some things happen too easy. Like it is all too easy to come to a conspirational meating or for a new acquaintance to convince other people that his actions are the correct ones. The end is better with tension and suspanse, but a bit hollywoodian. Considering that this is stand-alone novel and that the characters and the worldbuilding are good I think that this inconveniences can be easily overcome by the reader.

Overall Brandon Sanderson makes a good debut with "Elantris", an entertaining read and an original novel. And I certainly read his next novels because I think he is capable of improving his works.

I'm glad you liked 'Elantris. Brandon definitely gets better in his next book Mistborn :)

I'm glad to hear this. That means I will enjoy Mistborn ;)

I have a question regarding "Mistborn". Thanks to Tor's newsletter I got that one on my PC, but well is it dangerous to read it without the first one.

Elantris sounds like an enjoyable read. Yup. I want it!

I loved Elantris. Yes, the writing is not that exciting, but the story drew me in reaaal bad. I was copy-editing the book and sometimes I wuld catch myself skipping forward to see what happens... Bad for work, good for entertainment.

Out of curiosity, did you real the original or the translation?

Jen I read the translation, but I want to buy the original too, because I'm a little dissapointed about the format of Romanian version.