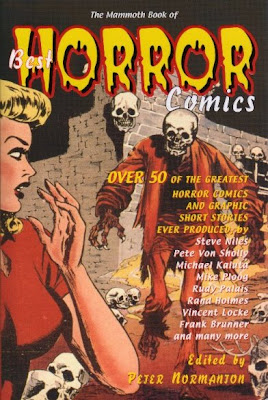 "The Mammoth Book of Best Horror Comics"
edited by Peter Normanton
Format: paperback, 512 pages
Publisher: Constable & Robinson
The anthology of Peter Normanton, a comic book collector who proves his line of expertise in “The Mammoth Book of Best Horror Comics”, is not just a simple anthology. It is a trip through the history of horror comic books, an initiation trip for the beginners and a recollection trip for the fans of these comics. It is a little museum spread along the pages of Peter Normanton’s book.
The anthology is structured in four parts which capture four time periods of the horror comic books, “The Dark Age of Comics 1940s and 1950s”, “The Terror Returns 1960s and 1970s”, “The Faithful Few 1980s and 1990s” and “A New Millennium for the Macabre 21st Century”. Each part has an introduction written by Peter Normanton explaining the particularities of each period, introducing the artists and the authors of the comics and revealing a little the market of horror comic books.
“The Dark Age of Comics” shows the beginning of the horror comics and the issues had by them with the pre-coded rules. The art of this period is a little crude and a bit simplistic, but not without their own charm. The stories seem to follow a certain pattern, with some of them concentrated on former Nazi officers and scenarios around them following the end of World War II. But they form a nice introduction to the world of horror comics.
“The Terror Returns” follows the comics in a new period, with a development in the art. Also the range of subjects increases with accents put on Science Fiction and supernatural themes.
“The Faithful Few” shows a development in the art and the stories of these comic books. The stories become more complex and powerful and it seems that other published fiction is transpose into comics. This section has two strong pieces, “The Dunwich Horror” an adaptation of H.P. Lovecraft’s story and “Purgation” a dark horror comic.
“A New Millennium of the Macabre” brings the reader to the present days of horror comics. The art and the stories are more diverse because the present days offer new techniques of work and new sources of inspiration. However the comics using the photo manipulation aren’t as powerful as those drawn.
“The Mammoth Book of Best Horror Comics” doesn’t gather all the names of horror comics’ history, that would have been impossible, and it doesn’t bring the big names of comic publishing into this anthology, they are largely known. But Peter Normanton’s book makes a timeline for the horror comics and shows the reader the evolution of these particular comic books.
Posted by Mihai A. at 11:04 AM

Wow, Doug, thank you very much :) You made me very happy :D