"Fall of Thanes" by Brian Ruckley 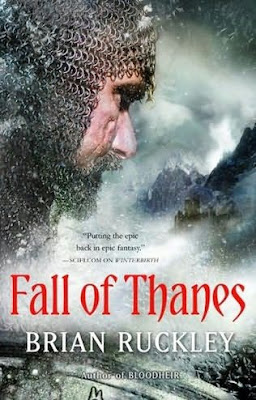 "Fall of Thanes"
by Brian Ruckley
Format: Hardback, 512 pages
Publisher: Orbit Books
Tension between the clans of the Black Road and the True Bloods is mounting, as each side in the conflict becomes ever more riven by internal dissent and disunity. And Aeglyss the na’kyrim continues to spread chaos in the world, exerting a dangerous, insidious influence over events both near and far.
As events mount to a climax, the world will change and no side can anticipate the twisted pattern of what lies ahead.
Last year I began a journey with “Winterbirth” in the universe of “The Godless World” trilogy continued with “Bloodheir” and concluded these days with the last novel in the Brian Ruckley’s series, “Fall of Thanes”. And what a journey it was.
I must admit that I find myself attracted many times by readings dark and gritty and Brian Ruckley in the conclusion of his trilogy offered me such a dark reading. I liked the atmosphere built in the first two novels, but I liked even more the one unfolded in “Fall of Thanes”. A dark atmosphere in a shattered world, built through wonderfully crafted descriptions and scenes that make the reader feel edgy and create tension. Brian Ruckley proved to be very skillful when it came to world-building in his trilogy, but with the conclusion on “The Godless World” he proved to be having a talent for descriptions as well. I found images which felt like moving right before my eyes.
The first two novels set into place the action and the conclusion of the series and “Fall of Thanes” only brings them to conclusion. This novel is not the fast moving one and it will seem to be dragging compared with the first two or with other genre novels. But although my desire for a bit more action is not fulfilled, I don’t feel disappointed or cheated by the conclusion of the series at all. I like how Brian Ruckley brought the trilogy to an end through a further building of characters, making them even stronger. I still remained at my opinion of Orisian and kept rather disliking him, but don’t put that on the author. Orisian improves too and develops further on, with an important role in the end which I didn’t see coming, but he didn’t appeal to me mostly because it is not exactly what I like my characters to be like.
The characters I liked kept appealing to me and I was happy to meet them once again and discover their destiny. What came as a very pleasant surprise was that one of the characters I was rather indifferent to came into focus and I ended up liking him the most from the ones in the “Fall of Thanes”, Kanin. And looking back over the all novels of the trilogy I loved how Brian Ruckley developed him from the initial point until the end. Also two other characters with minor roles until “Fall of Thanes”, Theor and Nyve, offered me surprises and picked my interest. Above all what I loved at the characters of Brian Ruckley’s series is the fact that I cannot say about even one of them that is good or bad. Each one of them and each involved party in the series’ conflicts is driven by the personal interest and line of conduct and not by a moral code on one way or another.
“Fall of Thanes” offered me a conclusion of “The Godless World” trilogy that it wasn’t expected by me, but which satisfied me in the fullest and which makes the waiting for a trilogy to unfold its events until the end worthwhile. From the first steps taken in my journey through “The Godless World” trilogy and until the last step of that journey I loved Brian Ruckley’s series.
Posted by Mihai A. at 12:19 PM

Completely agree with your thoughts on Brian's trilogy. It has become one of my favorites.

Anonymous, in an interview I had the chance to make with Brian Ruckley, he said that for the time being there are no plans for a further come back in this setting. But he also said that someday in the future it might be possible to write something else in this series' world :)

"Fall of Thanes is still on my to read list. After reading your good review I know I will not regret to read it.