Looking over the Brian Ruckley’s recently finished trilogy, “The Godless World”, I have to say that I was easily engrossed in his novels and that I enjoyed his series a lot. Naturally after finishing “The Godless World” series I was wondering what it will be next in the writing career of Brian Ruckley and with a visit to his website my question got an answer. Brian is working on a new title, a dark, heroic fantasy entitled “The Edinburgh Dead”. Here is a small presentation in Brian Ruckley’s own words:
The working title (and so far everyone, including me, seems to quite like it, so I imagine it'll probably survive all the way through to publication) is The Edinburgh Dead. The setting is, as you might guess, Edinburgh; specifically, Edinburgh in the first half of the 19th century. Since I write fantasy rather than history, though, it's not quite as simple as that.
I'm taking some gruesome and rather famous aspects of Edinburgh's past and spicing them up a bit with veteran warriors, magical conspiracies, killers both human and decidedly not, desperate combat and sinister goings-on in general. In short, it's a dark, heroic fantasy set in 19th century Edinburgh. With swords and gaslamps.
***
My next shopping list has in its top Joe Abercrombie’s new novel, “Best Served Cold”. But until I’ll receive my copy of his novel and be able to read it, a wonderful piece of news caught my attention. Joe Abercrombie on his blog announces that he works on a new novel, “The Heroes”, which is also a standalone (or a semi-standalone as Joe’s puts it) and it will be most probably available in 2011. Joe Abercrombie’s teaser made me check the date in my calendar for this book so far in advance:
Both because the action centres around a ring of standing stones called the Heroes, and because it's about heroism and that (meant semi-ironically, of course). It mostly takes place over the course of three days, and is the story of a single battle for control of the North. Think Lord of the Rings meets A Bridge Too Far, with a sprinkling of Band of Brothers and Generation Kill. It's about war, you get me? Principally it follows the (mis)adventures of six assorted persons on both sides and different levels of command, whose paths intersect during the course of the battle in various fateful, horrible, wonderful, surprisingly violent, surprisingly unviolent, and hilarious ways. With the Northmen: a veteran losing his nerve who just wants to keep his crew alive, an ex-Prince determined to claw his way back to power by any means necessary, a young lad determined to win a place in the songs for himself. With the Union: A depressive swordsman who used to be the king's bodyguard, a profiteering standard-bearer, and the venomously ambitious daughter of the Marshal in command. But of course a fair few familiar faces show up on both sides...
***
One of the most awaited titles is Scott Lynch’s “The Republic of Thieves”, the third book in the “Gentleman Bastard Sequence”. I have to admit to my shame that although Scott Lynch’s first two novels received glowing reviews I failed to read any of them. But, Scott made available on his website a preview of his future novel and gave me one more motive to start reading his series soon. You can find the preview here.
*** 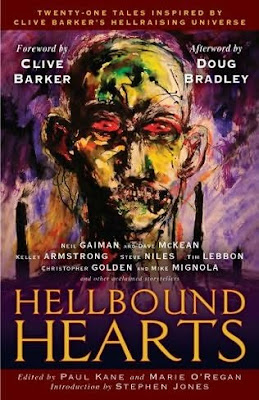 Last, but not least. With so many titles to look forward in the distant future it is good to look over one title that is nearly on the door. I a huge fan of Clive Barker and this new project brings me great joy seeing it. It is an anthology edited by Paul Kane and Marie O’Reagan, entitled “Hellbound Hearts” and containing 21 short stories that pay homage to Clive Barker’s novella, “The Hellbound Heart”. The book will be released by Simon & Schuster on September 29th. The book features a foreword by Clive Barker, an introduction by Stephen Jones and a line-up that makes my heart jump even higher, with authors like Conrad Williams, Sarah Pinborough, Christopher Golden, Tim Lebbon, Kelley Armstrong, Neil Gaiman and Steve Niles:
Foreword by Clive Barker
Introduction: Raising Hell, Again by Stephen Jones
Prisoners of the Inferno by Peter Atkins
The Cold by Conrad Williams
The Confessor’s Tale by Sarah Pinborough
Hellbound Hollywood by Mick Garris
Mechanisms by Christopher Golden and Mike Mignola (illustrated by Mike Mignola)
Every Wrong Turn by Tim Lebbon
The Collector by Kelley Armstrong
Bulimia by Richard Christian Matheson
Orfeo the Damned by Nancy Holder
Our Lord of Quarters by Simon Clark
Wordsworth by Neil Gaiman and Dave McKean
A Little Piece of Hell by Steve Niles
The Dark Materials Project by Sarah Langan
Demon’s Design by Nicholas Vince
Only The Blind Survive by Yvonne Navarro
Mother’s Ruin by Mark Morris
Sister Cilice by Barbie Wilde
Santos del Infierno by Jeffrey J. Mariotte
The Promise by Nancy Kilpatrick
However… by Gary A. Braunbeck and Lucy A. Snyder
‘Tis Pity He’s Ashore by Chaz Brenchley
Afterword by Doug Bradley
Special Bonus Material: Wordsworth Graphic short story Original Script by Neil Gaiman
Posted by Mihai A. at 12:01 PM

I'd really like to get my hands on that anthology you know. It sounds like the one I would really, really love to read. I am still trying to get to the first book of the "Gentlemen Bastards Sequence". Sounds quite the page turner and "The Edinburgh Dead" sounds even better.

Harry, I hope I will be able to start Scott Lynch's novels by the end of the year. After all is one of the reading goals I set for me at the beginning of the year. And when the time comes the other titles presented here too :)

Thanks for mentioning the Hellbound Hearts Anthology! There are now reviews at:
http://www.fatally-yours.com/horror-literature/book-review-hellbound-hearts-anthology/

All the best,
Barbie Wilde

Barbie, thank you for visiting my blog :)
I am looking forward to read your story as well :)