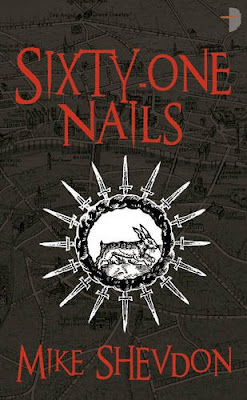 "Sixty-One Nails"
by Mike Shevdon
Format: Paperback, 528 pages
Publisher: Angry Robot Books
Review copy received through the courtesy of the author, Mike Shevdon
There is a secret war raging beneath the streets of London. A dark magic will be unleashed by the Untained… unless a new hero can be found.
Neverwhere’s faster, smarter brother has arrived. The immense “Sixty-One Nails” follows Niall Petersen, from a suspected heart attack on the London Underground, into the hidden world of the Feyre, an uncanny place of legend that lurks just beyond the surface of everyday life. The Untainted, the darkest of the Seven Courts, have made their play for power, and unless Niall can recreate the ritual of the Sixty-One Nails, their dark dominion will enslave all of the Feyre, and all of humankind too.
A very young imprint, Angry Robot Books, published among its first titles the debut novel of Mike Shevdon, “Sixty-One Nails”, which is also the first novel in the “Courts of the Feyre” series.
It happens sometimes to get a book that doesn’t offer me a satisfying reading and in that case I stop reading the book in question. Lately, I didn’t get to close many books before finishing them, but although I did reach the end of “Sixty-One Nails” I have to say that it wasn’t a book on my liking. It is true that I passed two such moments, but maybe due to the fact that Mike Shevdon offers a light and quick reading or that I wanted to fortify my impression of the novel I finished “Sixty-One Nails”.
The novel is based on maybe the oldest conflict in the world, the battle between good and evil, focusing on the struggle of Niall, the main character, to stop the Untainted to reach and subdue our world. There is nothing wrong with the eternal battle between good and evil, but in this case I have to say that I failed to engage with the story. The Untainted try to overpower our world for their own dark interest, but the presence of the negative side is scarce, they are only slightly detailed and Mike Shevdon doesn’t concentrate much on them. Therefore although the story suggests that the world is in a big danger, I didn’t feel at any moment that this menace is real and didn’t care much if in the end Niall Petersen managed to stop them or not.
Contributing to my failed engagement with the story is the main character as well, Niall Petersen. He failed to stir any feelings from me towards him (well, it did stir some, but not in his advantage) and within the story Niall made me raise my brow more than a couple of times. For instance, Niall is described as a man focused on building a successful career, capable to sacrifice even his family for that career, but he drops everything when a complete stranger presents him with a story of his bloodline. Which in the situation given would seem more than unbelievable for a man such as Niall, so I think. Also, Niall is capable of using magic, but he seems to do that all of the sudden and without anyone explaining him how to use his capabilities.
The story moves very slowly, taking too much time to pick up some speed, which happens only in the last third of “Sixty-One Nails”. The scenes take a long time to unfold and I ended up with more pages than necessary for the same scene. What helped me ignore a bit this situation is the way how Mike Shevdon describes London and how he manages to create a lively setting. I could feel that he knows the city well and that he puts a lot of effort in the research. I could feel that from the ritual described by Mike Shevdon in his novel and I was pleased to find out details of this ritual.
I have nothing but respect for Mike Shevdon’s efforts and work, but “Sixty-One Nails” is definitely not for me.
Posted by Mihai A. at 12:57 PM

Thanks for the honest review which convinced me that Sixty-One Nails is neither a book for me.

When I don't like a book I normally stop reading it. There is only one exception: In case a promised to write a review.

The book didn't work for me, so I couldn't write a positive review :)

I liked it myself, though many of the points you bring up are quite accurate.

The only thing is that I have no problem with Niall suddenly being able to do magic, because that's just how magic works in the world of Sixty-One Nails.

It would be one thing for Niall to do it in a world that actually requires a lot of effort, study, etc. to do magic... it's another in which you either you're capable of doing it or you aren't. Sixty-One Nails is more of the latter.

I agree with the repetition part. It felt like some discussions got repeated unnecessarily, and close to one another.

But in all, it was a page-turner for me and I found the characters enjoyable.

The climax was disappointing though, but I liked where the novel left off setting up the rest of the series.

TheMan, although the novel didn't work for me it has its readers and I am glad you enjoy it. The sequel, "The Road to Bedlam", was schedule to be released this month, but with the changes Angry Robot suffered I believe that it will be released in September :)