Cover art - “The Blade Itself” (Tăișul Sabiei) by Joe Abercrombie 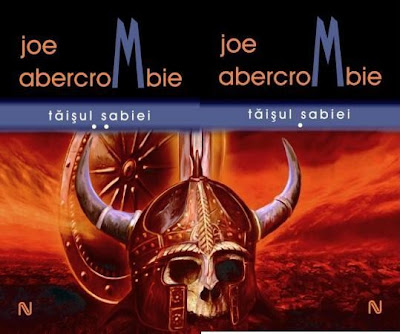 There are several book covers that are simple, but that are truly effective and work better than the wide majority of the more complex ones. The UK editions of Joe Abercrombie’s novels have such covers. His debut novel, “The Blade Itself”, comes to Romania too, but I am sad to say that the cover doesn’t match any of my expectations. I was hoping for the Romanian publisher to keep the simplicity of the UK covers, but the same beauty and effectiveness of them. Well, they did not, although I have to admit also that it is not the worse of the Romanian covers I’ve seen. I am disappointed that the cover of Joe Abercrombie’s “The Blade Itself” (Tăișul Sabiei) is part of a series of stereotypical covers with which the Romanian publisher, Nemira, used me. It is true that I can recognize a novel published in Nemira’s speculative fiction collection, Nautilus, in any bookshop without looking at the publisher’s name, but none of their book covers remains in my memory once I stepped outside the bookshop’s doors. I really wish they will begin to show more imagination for the book covers, because after all the Romanian speculative fiction market showed that it has such potential. Only on a couple of occasions, but it really surfaced.
Oh, and one more thing. The Romanian edition of Joe Abercrombie’s novel will be released in two volumes, with the image you see above split in two. But the cover you see on the left half is for the second volume, while the right half is for the first volume. It seems odd to me, but maybe it’s just me, since I am used to look upon my personal library’s shelves from left to right. Actually, most of the times I start from the left.
Posted by Mihai A. at 1:00 PM

That's really ... odd. Though the UK "map" style covers of Abercrombie's books are awesome, so anything else pales in comparison. Why is the M so large in his name too?

I actually kinda like the skull / helmet thing, but what's with the giant M?

I am not sure why the M is so large. I don't understand why it is put so much in evidence.

Great Points on cover art. Never thought of it that way.

the M is so big because that`s the layout of the romanian publisher...all the covers from the sf/f collection look alike in many features and have some of the letters bigger than others...