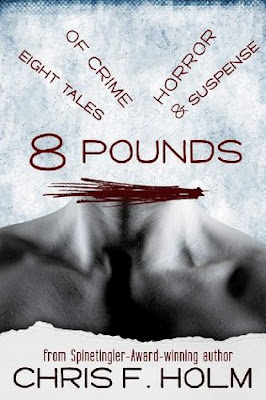 "8 Pounds: Eight Tales of Crime, Horror & Suspense"
by Chris F. Holm
Publisher: Poisonville Press
The review is based on a bought copy of the book
I am not sure if I ever would have get a chance to read Chris F. Holm’s collection of stories, “8 pounds: Eight Tales of Crime, Horror & Suspense”, if it was not for his recently released debut novel, “Dead Harvest”. Being a preponderant writer of crime and mystery short stories limited the channels through which I could have discovered the collection to only very few. But while reading “Dead Harvest” I stumbled upon an opportunity of downloading for free Chris F. Holm’s short story collection, occasion that came in handy after I finished his debut novel and my curiosity pushed me towards the writer’s short fiction.
“Seven Days of Rain” – Sixty years after the childhood events in Eddie Hanscombe’s life the truth hidden for this entire period comes floating up during seven days of heavy raining. In a heavy atmosphere sustained by the constant falling of rain the story mixes the present events with the past ones in an excellent combination. Chris F. Holm develops very well the plot, constructs the main character in a very satisfying manner and builds suspense releasing it with an excellent efficiency.
“A Better Life” – A family moved in the countryside for a chance of offering their unborn child a better life try to identify and eliminate the source of the strange noises they hear in their house. Through a very well kept sense of discomfort the tension rises constantly until the outcome of the story is revealed. Together with its terrifying side.
“A Simple Kindness” – While on a subway train Tom Mills, attracted by a woman in the opposite sit, lifts her forgotten bag and follows her only to discover himself in a very difficult situation. It is a pulp mystery story, full of energy, action and surprises. It is also centered on a character with whose fate you cannot be sympathetic, but to a certain extent since after all he is in the mess pretty much by himself.
“The Toll Collectors” – The professional ruffian Ray McDaniel travels home after his latest job, but discovers that this time the road is not as smooth as he wishes to be. “The Toll Collectors” feels weaker than the rest of the stories, with a few details that seem to be drawn together hastily. Nonetheless, it is an interesting ghost story, with a pretty good feeling of uneasiness, and in which the reader is uncertain what side to take.
“Eight Pounds” – Two friends talk in a bar, the one with a heavy conscious feeling hinted accusation from the other. Chris F. Holm makes another wonderful exploration into the human mind and creates one more interesting character. His growing insecurity and panic almost reaches the breaking point, but when his relief from personal torment comes it arrives with a shocking perspective.
“The Well” – A young girl finds herself trapped within an abandoned well while chasing butterflies and must seek means of survival. The shortest story of the collection, in the horror spectrum, with an uproariously conclusion.
“The Big Score” – Mike Malloy, a lobster fisherman, is confused for his fellow lobsterman, Jimmy Bradfield, and finds himself caught between a couple of treasure hunters. The story is nicely set, Chris F. Holm using fog this time to fashion an atmosphere of confinement and contraction. The end comes through a lovely scheme assembled by the main character, Mike Malloy.
“The World Behind” – Tim Hewitt recollects the summer of his childhood when he discovered that the woods near his neighborhood has secrets buried deep within. The last story of Chris F. Holm’s collection was the one working the least for me. It is a story of coming of age, of childhood memories with their delightful moments and more or less unreasonable fears. It is a predictable story, with not a single moment of incertitude along its course. This feeling is amplified by the rest of the stories from the collection, each of them springing on the unsuspecting reader.
“8 Pounds: Eight Tales of Crime, Horror & Suspense” didn’t reveal a very different writer than the one discovered through “Dead Harvest”, but showed me an interesting side of Chris F. Holm. He mastered the three genres included in the title of the collection with capability and energy. But no matter what the genre in which the story can be included the carefully constructed atmosphere, the interesting and almost always shady characters and the details that Chris F. Holm chooses to keep from the reader until one is taken totally unaware by their exposure make the stories stand for themselves.
If like me you read and enjoyed Chris F. Holm’s debut novel “8 Pounds: Eight Tales of Crime, Horror & Suspense” would be a wonderful companion for the respective book. Actually, it has no importance what your experience is with “Dead Harvest”, because Chris F. Holm’s “8 Pounds: Eight Tales of Crime, Horror & Suspense” is better in my opinion, a solid collection of worthy short stories.
Posted by Mihai A. at 12:30 PM