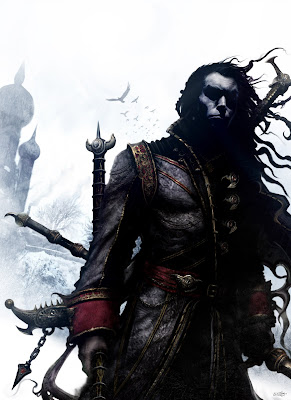 Solaris Books on its website and blog kicks off the new year in style with the preview of the cover art for one of the titles the publishing house has in its schedule for 2010. The novel is the first one in a new fantasy series, “King Rolen’s Kin”, is entitled “The Bastard Son” and is written by Rowena Corey Daniells. I’ll admit that the author’s name doesn’t say anything to me, but the artwork worked its magic and I went immediately in search of information. I discovered on the Rowena Corey Daniells’ website more information about the author and her series. “King Rolen’s Kin” series will have three books, each one following the lives of three of King Rolen’s children. On the author’s website I found a presentation of the novel, but also of the next two novels in the series, “The Uncrowned King” and “The Usurper”. I quote the first one here and the other two, as well as the first, you can find Rowena Coreu Daniells presentation of the series.
Cloaked in silent winter snow the Kingdom of Rolencia sleeps as rumours spread of new Affinity Seeps, places where untamed power wells up. By royal decree, all those afflicted with Affinity must serve the Abbey or face death. Meanwhile, King Rolen plans his jubilee, unaware that danger threatens those he loves.
Sent to the Abbey because of his innate Affinity, the King’s youngest son, Fyn, trains to become a warrior monk. Unfortunately, he’s a gentle dreamer and the other acolytes bully him. The only way he can escape them is to serve the Abbey Mystic, but his Affinity is weak.
Fiercely loyal, thirteen year-old Piro is horrified to discover she is also cursed with unwanted Affinity. It broke their mother’s heart to send Fyn away, so she hides her affliction. When Fyn confesses his troubles, Piro risks exposure to help him.
Even though Byren Kingson is only seven minutes younger than his twin, Lence, he’s never hungered for the Rolencian throne. When a Seer predicts that he will kill Lence, he laughs. But Lence Kingsheir sees Byren’s growing popularity and resents it. Enduring loyalty could be Byren’s greatest failing.
As for the cover art, I said before that I am not a big fan of the characters featured on the cover. But with some conditions met I am willing to make exceptions from that rule and this is one of those cases. I like this cover because the character featured on the cover it is not a detailed one. I mean that his face it is not overly detailed, leaving much on the readers’ imagination. I like his clothes and weapons and together with the scene behind the character they make me curious about the story and the setting of the novel. The artist of the cover is Clint Langley, an artist who caught my eye with the covers he made for Malus Darkblade novels.
Posted by Mihai A. at 12:05 PM

From the cover art alone I assumed it was a novel published by the Black Library. The character looks to be heavily based on Malus Darkblade, so I'm not sure if that's just Langley's style coming out or if Corey Daniells' novel has the flavour of the Warhammer World... Still, it's an excellent bit of cover art :D

John Jarold Posted on his live journal the release dates of his clients for 2010, and it looks like the three books in King Rolen's Kin will be published in consecutive months (July, August, September)

Phoenix..I hope that is true. I like the cover of book 1, and the series actually sounds pretty interesting.

Jamie, it might be the style of Clint Langley. I don't know exactly about the novel though :)

Phoenix, thank you very much for the info. I will be checking out the series too, because as Jeff says it sounds quite interesting :)

Simcha, thank you very much. I hope you'll find reasons to still visit my blog :)
I love book covers, for their artwork and because it is nice way for me to find about new authors or writers I didn't know about. This is one of those cases and I am very curious to read Rowena Corey Daniells' series ;)