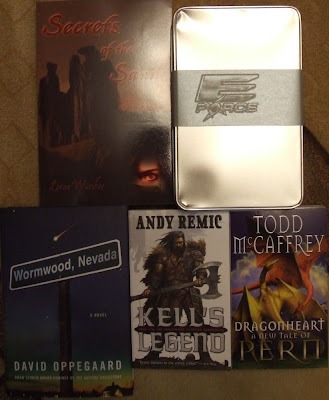 Fortunately, during the holidays my mailbox didn’t go completely dry, so I still received a few books in my mail. Also, the presence of that silver box in the photo is no mistake, it contains a book. I was surprised to see it in the mailbox, but it was an interesting experience nonetheless :)
- "Dragonheart" by Todd McCaffrey (through the courtesy of Corgi Books);
When Fiona, the only surviving member of Lord Holder Bemin's family, Impresses a queen dragon, she doesn't begin to realize the perils and privileges that come with her new role.As she grows into a young woman and her dragon reaches her full growth, Fiona faces not only the possibility of losing her dragon to the sickness that has claimed so many others but also the challenges of becoming a Weyrwoman in her own right. What, she must ask herself, is she willing to give up in order to become a queen rider?And, although the marvellous queen dragon has chosen her, is she really suited to the life of a queen rider?
As the injured dragons at Fort Weyr begin to outnumber those fit to fly against Thread, Weyrleader K'lior comes up with a desperate plan - to send the least injured and the older weyrlings back in time, so that they can grow strong enough to fight Thread in the past and then returnto help the Weyr.But will only twelve older weyrlings and thirty lightly injured riders be enough to save Fort Weyr?Forced to stay behind because her dragon is still too young, Fiona must confront a life-and-death choice.
- "Kell's Legend" by Andy Remic (through the courtesy of the David Gemmell Awards administrators);
The land of Falanor is invaded by an albino army, the Army of Iron. A small group set off to warn the king: Kell, ancient hero; his granddaughter, Nienna and her friend, Katrina; and the ex-Sword Champion of King Leanoric, Saark, disgraced after his affair with the Queen.
Fighting their way south, betrayal follows battle follows deviation, and they are attacked from all quarters by deadly albino soldiers, monstrous harvesters who drain blood from their victims to feed their masters, and the twisted offspring of deviant vachine, the cankers. As Falanor comes under heavy attack and crushing invasion, only then does Nienna learn the truth about grandfather Kell – that he is anything but a noble hero, anything but a Legend.
- "Wormwood, Nevada" by David Oppegaard (through the courtesy of St. Martin's Press);
Tyler and Anna Mayfield have just relocated from Nebraska to the sun scorched desert town of Wormwood, Nevada. They find themselves in a strange new landscape populated with old school cowboys, alien cultists, meth dealers, and doomsday prophets. Loneliness and desperation pervade Wormwood, and when a meteorite lands in the center of town, its fragile existence begins to unravel as many believe the end of the world is near, while others simply seek a reason to believe in anything at all.
- "Secrets of the Sand" by Leona Wisoker (through the courtesy of Mercury Retrograde Press);
When Cafad Scratha was a child, someone murdered his entire family. People have questioned his sanity ever since.
As the last Scratha, he's dedicated his life to catching the murderers. Now a desert lord, one of the mysterious elite of the southlands, he stands above every mundane political imperative and rule of courtesy--or so it seems until the king of the northlands tries to bring Scratha to heel. Scratha's bizarre reaction throws the independent southlands into chaos: he hands temporary control of his family lands over to the king, takes on an assumed name, and sneaks out of the city.
The king sends Alyea, a young noblewoman, to hold the ceded prize: but while she understands kingdom politics, she's quickly out of her depth in the byzantine world of the southlands. What she thought was a quick ticket to power turns out to be a dangerous assignment that may well lead her to a literal dead end.
Just as trapped is Idisio, the orphaned street-thief sent by a chance encounter into Scratha's service. As his new and throughly unstable master goes undercover, Idisio finds himself drawn into the mysterious world of the desert lords and their secrets. Idisio's growing comprehension of the world he's stepped into doesn't just change his beliefs; it leads him to an unsuspected truth about himself that will change his life forever.
- "E-Force: State of Emergency" by Sam Fisher (through the courtesy of Pan Macmillan).
E-FORCE: Six gifted, super-fit, highly trained individuals
MISSION: Specialist rescue in times of global emergency
The Emergency Force team - including former marine Mark Harrison, shuttle pilot Michaela Buchanan and cyber genius Tom Erickson - employs some of the most highly advanced equipment on the planet, from Mach-10 jets to incredible cybersuits that make them almost super-human.
They'll need all gadgetry they can get for their first mission - to save the life of US Senator Kyle Foreman, an ecological, Obama-like politician taking the world by storm.
As Foreman gave a speech in LA, two bombs ripped through the huge conference centre where he and thousands of his supporters had gathered. Many have died. Miraculously Foreman has survived - except, as fires rage and floors collapse, he's trapped inside.
As E-Force plan, and battle their perilous route into the devastated building to rescue him, so too does the Dragon, a psychotic assassin, who will let nothing - but nothing - get in his way to complete his deadly mission.
The high-octane, action-packed race is full on...
Thank you all very much! 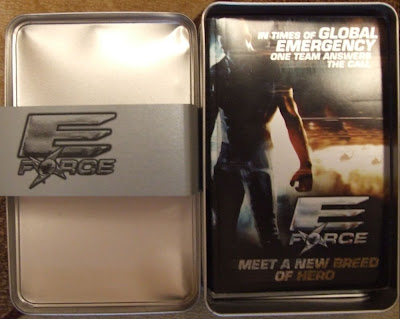