I am always curious about new debuts in the fantasy genre, but even more so about the new titles in fantasy from authors translated in English. One of the excellent examples is Andrzej Sapkowski with his very interesting Geralt the Witcher books. I would really like to see more such writers and series translated in English and an exploration of the fantasy genres from different cultures and countries around the world. I will have one of such chances this February when Tor Books will publish the first novel in the “Chronicles of Siala” trilogy, “Shadow Prowler” by Alexey Pehov. Alexey Pehov is a Russian author of fantasy and science fiction and his works are very popular in Russia. “Shadow Prowler” was published for the first time in 2002 as “Stealth in the Shadows” and is the first novel in a trilogy, being followed by the novels “Dganga Dance with Shadows” and “Blizzard of Shadows”. “The Chronicles of Siala” is a very popular series, recognized with awards and which inspired many role playing clubs, also with a computer game based on the books being developed. So I have many reasons to explore this series. As an aside, I was pleasantly surprised to see that I share the same date of birth as Alexey Pehov, 30th of March, only I am a year older ;)

After centuries of calm, the Nameless One is stirring.

An army is gathering; thousands of giants, ogres, and other creatures are joining forces from all across the Desolate Lands, united, for the first time in history, under one, black banner. By the spring, or perhaps sooner, the Nameless One and his forces will be at the walls of the great city of Avendoom.

Unless Shadow Harold, master thief, can find some way to stop them.

Epic fantasy at its best, Shadow Prowler is the first in a trilogy that follows Shadow Harold on his quest for a magic Horn that will restore peace to the Kingdom of Siala. Harold will be accompanied on his quest by an Elfin princess, Miralissa, her elfin escort, and ten Wild Hearts, the most experienced and dangerous fighters in their world…and by the king’s court jester (who may be more than he seems…or less).

Reminiscent of Moorcock's Elric series, Shadow Prowler is the first work to be published in English by the bestselling Russian fantasy author Alexey Pehov. The book was translated by Andrew Bromfield, best known for his work on the highly successful Night Watch series. 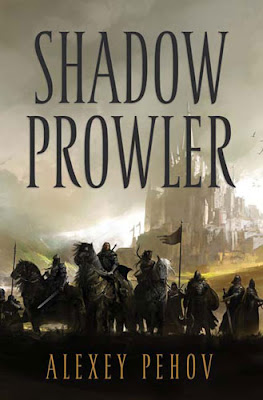 I think translated works from other countries and cultures will vastly enrich our reading here in the US, so I hope the translation of more works continues. I adore Sergei Lukanyenko (sp?) and his Nightwatch series, which are translated from Russian. Part of their charm is that the outlook of the characters is very different from the standard 'default' attitudes here in the US.

I've read about some Chinese sf/fantasy being translated recently, and wish I'd made a note of where.

If you have or find any links to sites that discuss speculative fiction translated into English, I would love to see them.

I think that translated works can enrich the reading experience and not only the fantasy genre, but thw world of literature too.
I am not aware of many sites that discuss the translated speculative fiction, but I am still looking for them :)

This sounds good! I've never heard of this author before but for some reason I look books featuring thieves, and I love a good epic fantasy. I look forward to reading your review on this one.

The premises of this novel sound very interesting. I also love a good epic fantasy so I am looking forward to read this one :)