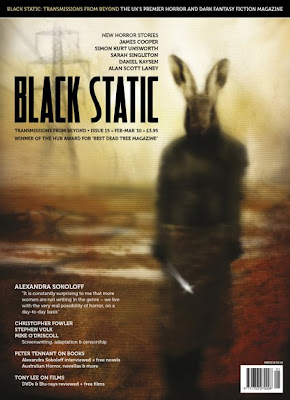 "Black Static"
Issue 15 - February/March 2010
Publisher: TTA Press
Review copy received through the courtesy of the publisher, TTA Press
Black Static is a magazine such as every dark fantasy and horror fan wishes to read, but also a magazine that other readers might find interesting as well. With its mix on non-fiction and fiction material Black Static offers information, reviews and stories that can open new doors to everyone indulging in the reading of an issue.
The 15th issue offers the same alignment, with the non-fiction and article and the fiction pieces inlaid between each other, in a one-by-one pattern. The non-fiction is opened with the “White Noise”, a series of news compiled by Peter Tennant, followed by articles regarding the screenwriting and movie adaptations written by Christopher Fowler (“Interference”) and Stephen Volk (“Electric Darkness”), by a question raised over the limits of censorship raised in “Night’s Plutonian Shore” by Mike O’Driscoll and finished in style with the very informative reviews columns, “Blood Spectrum” by Tony Lee covering the DVD/Blu-ray releases and “Case Notes” by Peter Tennant covering the book reviews. “Case Notes” includes also a very interesting insight in the Australian horror and an interview with Alexandra Sokoloff.
The fiction section is shaped by 5 short stories and although the majority of their authors are unknown to me it is a well made selection (with an exception for me however):
“Eight Small Men” by James Cooper – A man returns to the house where he and his brother spent a period with a foster family after the deaths of their parents. The return stirs heavyweight memories. James Cooper builds a powerful story, moving between two points in time that reveal disturbing and shocking images and events. It is an engaging story that creates an eerie atmosphere built on the childhood innocence and the events that might lead to the loss of that innocence. It is an evoking story that leaves an uncomfortable feeling.
“The Knitted Child” by Simon Kurt Unsworth – A family deals with a miscarriage, each member in his own way. A short story, but a strong one nonetheless. Capturing different personalities facing a tragic event the story looks also into the bounds created within a family, focuses on the psychological aspect of the event and follows the swirl of emotions. A touch of supernatural will give the story an unsettling dimension as well.
“Maximum Darkness” by Alan Scott Laney – A man finds himself in the middle of a story that seems reaped from a book that he once read. With all the honesty, this story didn’t work on any level for me. Completing a circle, with the beginning part similar with the ending one, the story seems only an excuse to complete that circle. I also couldn’t find a motivation behind the main character’s actions and I ended up wondering what the message of the story is.
“Babylon’s Burning” by Daniel Kaysen – Invited by his brother to a company party the main character ends up recruited by this company, although he despise its actions and objectives. A story in which the character is trapped in a situation very similar with a pact with the devil. Although the main character benefits of many advantages the reverse of the coin offers unpleasant perspectives as well. There is an edge to this story too, since the character is forced into the acceptance of the situation rather than making that choice on his own accord. It is an interesting story, but it feels a bit disembodied and seems to be cut short. But maybe the author meant to leave the reader in a shadowy territory than in a clearly light or dark one. Also it seems to exaggerate with a singular type of reward, overusing it in my opinion.
“Death by Water” by Sarah Singleton – Devastated by the loss of his wife and with difficulties in accepting this loss the main character seeks a contact with his departed wife through visits to different mediums. Another great piece of fiction, with a carefully and successfully built atmosphere, a strong character and haunting scenes, especially those invoking the memory of the lost love. Despite the fact that I was a bit disappointed by the end of the story, I really liked how Sarah Singleton worked on it, moving the plot on a steady rhythm towards its peak.
Like I’ve said the fiction section consists, with one exception for me, in a well made selection, starting and ending with two very strong stories beating each other for the best presence in the issue. I really liked “Eight Small Men” and “Death by Water” and both of them satisfied me in the fullest, but I’ll give a small push to the first one because it revealed to me its author, James Cooper.
Posted by Mihai A. at 12:00 PM