Title spotlight - "The End of the Line" edited by Jonathan Oliver 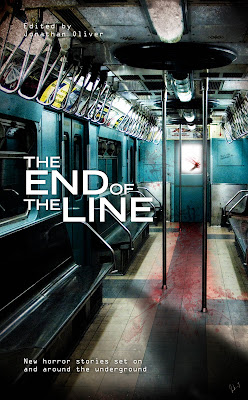 Clive Barker’s “The Midnight Meat Train” is a spooky story and one among those published in the “Books of Blood” that made these collections one of my favorites. Two years ago “The Midnight Meat Train” turned into a movie and although the adaptation wasn’t as good as the Clive Barker’s short story, it still featured Vinnie Jones in a speechless and creepy role. But this is not the only exploration of the underground in the horror literature, because we have to admit that the underground stirs and tickles the imagination.
This year, a new collection of horror stories set in the underground will be available. Jonathan Oliver is the editor of “The End of the Line”, an anthology which will be published by Solaris Books in November this year and which feeds the imagination of the readers with stories from a strong line-up of authors. Although there are still a couple of small details to be settled, such as a few stories to be finished and the final order of the table of contents, here is the complete line-up of writers, in alphabetical order, who will delight us with their stories in “The End of the Line”:
- Jasper Bark
- Simon Bestwick (“The Sons of the City”)
- Pat Cadigan
- Ramsey Campbell (“The Rounds”)
- Al Ewing (“The Roses That Bloom Underground”)
- Chris Fowler (“Down”)
- Joel Lane
- Rebecca Levene
- James Lovegrove
- Gary McMahon (“Diving Deep”)
- Paul Meloy
- Mark Morris (“The Fallen Boys”)
- Adam L.G. Nevill (“On All London Underground Lines”)
- John L. Probert (“The Girl in the Glass”)
- Natasha Rhodes (“Crazy Train”)
- Nicolas Royle
- Michael Marshall Smith (“Missed Connection”)
- Stephen Volk
- Conrad Williams (“Audience Leaving”)
Although there are still a few months until “The End of the Line” will be published I have plenty of reasons to put Jonathan Oliver’s anthology on my wish list so far ahead its release day.
Posted by Mihai A. at 12:59 PM

Hmmm, this looks like an anthology I'll definitely have to look out for.