"Witchfinder: Dawn of the Demontide" by William Hussey 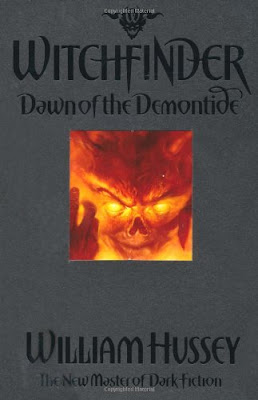 "Witchfinder: Dawn of the Demontide"
by William Hussey
Format: Paperback, 352 pages
Publisher: OUP Oxford
Review copy received through the courtesy of the publisher, OUP Oxford
An Ancient Evil Walks Again
Jake Harker is an outsider, a loser whose nose is always in a horror comic. That is until horror stops being fiction and the Pale Man and his demon Mr Pinch stop Jake on a dark, deserted road. That night, under a tree called the demon's dance, Jake will learn the true meaning of terror . . .
Being impressed with the two horror novels published by William Hussey so far I was intrigued to find that although his next work was in the same specter as his first two novels, “Through a Glass, Darkly” and “The Absence”, he shifted his aim towards a younger audience. Nonetheless I was thrilled to pick up his latest novel, “Witchfinder: Dawn of the Demontide”, the first in a dark trilogy.
Demons threaten humans throughout the entire literature history and they threat our world once more in “Witchfinder: Dawn of the Demontide”. But if the subject isn’t new the way William Hussey delivers his story makes from his novel a very pleasant and enjoyable reading. The story of “Witchfinder: Dawn of the Demontide” is also a race against time and this aspect is felt through the rhythm of the novel. From the first word put on paper William Hussey keeps the pace constant, shifting it only on some necessary points and only on a faster level. Therefore, the story moves quickly and on a natural course, without bumps that shake the logic of the plot, but with a few twists and turns that make the reader unaware of what the next page will bring.
Like in my previous experiences with William Hussey’s works the first thing that engulfs me in his novel is how he describes things, characters and events. William Hussey is a natural talent in this matter, each image having an almost visual impact and the description helping the mind to build that image more easily. Also, a small piece of information can turn the elements with a less presence in the story almost as interesting as those that are covered more within the novel. “Witchfinder: Dawn of the Demontide” comes with a few strong negative characters, a bit stronger than the positive ones in my opinion, wonderfully built by the author, from their physical appearance and until their hidden motivation. Adding to their presence are the demons bound to them, described by William Hussey in a way that can give a reader goose bumps.
The novel is sprinkled with a few deaths and a quantity of gore that can’t be easily ignored. I personally don’t have a problem with these aspects, but I was left wondering that considering that the novel is aimed towards a young adult audience what will that audience think about these. I see the novel through adult eyes and since from my adolescence years the world changed a bit, I think that only an adolescent can say if the blood and death are used in excess or not. Due to the same fact, the novel being written for a young adult audience, I believe that William Hussey is bound within certain limits and therefore “Witchfinder: Dawn of the Demontide” felt a bit weaker compared to his first two novels. But maybe this comparison is not to be made.
Despite the fact that “Witchfinder: Dawn of the Demontide” didn’t work as strongly as “Through a Glass, Darkly” and “The Absence” for me, the novel still offers a beautiful reading and proves that William Hussey is a talented author and one of the strongest voices of modern horror.
Posted by Mihai A. at 12:00 PM

This wasn't my favorite book either, even though I loved Mr. Hussey's first two books...

Ben, it is true that this one is a bit weaker than the other two William Hussey's novels, but I am not sure if I can compare them after all. Like I said for a YA novel it might be possible to need a different approach on the genre :)