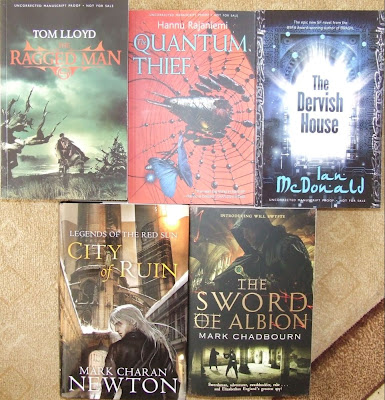 May indeed was an awesome month in terms of the books received and I could see that this week too when some new titles arrived into my mailbox. Also, May was a rich month when it comes to the books I bought because this month’s shopping list was the longest since the start of the year.
- "The Ragged Man" by Tom Lloyd (through the courtesy of Gollancz);
Continuing the powerful epic that started with THE STORMCALLER; theLord Isak is dead, his armies and entire tribe in disarray. It falls to King Emin to continue the war alone, and the Menin are only too happy to meet his challenge.
In Byora, Ruhen is developing his 'Saviour' persona. The Harlequins start preaching in his name and many of the pilgrims who flock to him are recruited to be 'Children', disciples who spread Ruhen's message. All over the Land people are starting to see Ruhen as the answer to their troubles.
A showdown is coming: battle lines are finally drawn and the atrocities quickly mount. The spectre of the Great War looms, but in this age the Gods cannot and will not come to King Emin's aid. With the peoples of the Land turning against Emin and his few remaining allies, their only chance for survival lies in the hands of a dead man.
There is a new Saviour in the Land - but the people may come to regret the 'peace' he offers...
- "The Quantum Thief" by Hannu Rajaniemi (through the courtesy of Gollancz);
Jean le Flambeur is a post-human criminal, mind burglar, confidence artist and trickster. His origins are shrouded in mystery, but his exploits are known throughout the Heterarchy - from breaking into the vast Zeusbrains of the Inner System to steal their thoughts, to stealing rare Earth antiques from the aristocrats of the Moving Cities of Mars.
Except that Jean made one mistake. Now he is condemned to play endless variations of a game-theoretic riddle in the vast virtual jail of the Axelrod Archons - the Dilemma Prison - against countless copies of himself. Jean's routine of death, defection and cooperation is upset by the arrival of Mieli and her spidership, Perhonen. She offers him a chance to win back his freedom and the powers of his old self - in exchange for finishing the one heist he never quite managed . . .
- "The Dervish House" by Ian McDonald (through the courtesy of Gollancz);
In the CHAGA novels McDonald brought an Africa in the grip of a bizarre ailien invasion to life, in RIVER OF GODS he painted a rich portrait of India in 2047, in BRASYL he looked at different Brazils, past present and future. Ian McDonald has found reknown at the cutting adge of a movement to take SF away from its Britsh and American white roots and out into the rich cultures of the world.
THE DERVISH HOUSE continues that journey and centres on Istanbul in 2025. Turkey is part of Europe but sited on the edge, it is an Islamic country that looks to the West. THE DERVISH HOUSE is the story of the families that live in and around its titular house, it is at once a rich mosaic of Islamic life in the new century and telling novel of future possibilities.
- "City of Ruin" by Mark Charan Newton (through the courtesy of Tor UK);
Villiren: a city of sin that is being torn apart from the inside. Hybrid creatures shamble through shadows and barely human gangs fight turf wars for control of the streets.
Amidst this chaos, Commander Brynd Lathraea, commander of the Night Guard, must plan the defence of Viliren against a race that has broken through from some other realm and already slaughtered hundreds of thousands of the Empire’s people.
When a Night Guard soldier goes missing, Brynd requests help from the recently arrived Inqusitor Jeryd. He discovers this is not the only disapearance the streets of Villiren. It seems that a serial killer of the most horrific kind is on the loose, taking hundreds of people from their own homes. A killer that cannot possibly be human.
The entire population of Villiren must unite to face an impossible surge of violent and unnatural enemies or the city will fall. But how can anyone save a city that is already a ruin?
- "The Sword of Albion" by Mark Chadbourn (through the courtesy of Transworld Books).
1588: The London of Elizabeth I is rocked by news of a daring raid on the Tower. The truth is known only to a select few: that, for twenty years, a legendary doomsday device, its power fabled for millennia, has been kept secret and, until now, safe in the Tower. But it has been stolen and Walsingham's spies believe it has been taken by the Enemy. This Enemy is not who we usually think of as our traditional opponet. No, this Enemy has waged a brutal war against mankind since time began, and with such a weapon they might take terrible toll upon England's green and pleasant land...
And so it falls to Will Swyfte - swordsman, adventurer, scholar, rake, and the greatest of Walsingham's new breed of spy - to follow a trail of murder and devilry that leads deep into the dark, venomous world of the Faerie. As Philip of Spain prepares a naval assault on England, Will is caught up in a race against time in pursuit of this fiendish device...
Thank you all very much!
Posted by Mihai A. at 11:33 AM

I loved that Mark Chadbourn book. :)

It is one I am looking forward to read :)