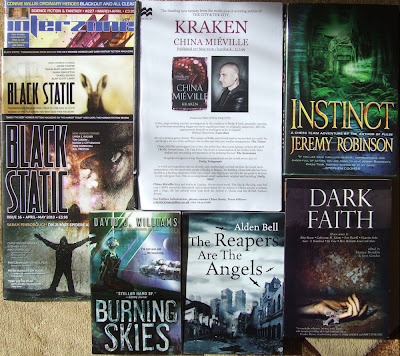 Quite a few reading material arrived lately in my mailbox:
- Interzone #227 (through the courtesy of TTA Press);
- Black Static #15 (through the courtesy of TTA Press);
- Black Static #16 (through the courtesy of TTA Press);
- "Kraken" by China Miéville (through the courtesy of Pan Macmillan);
Deep in the research wing of the Natural History Museum is a prize specimen, something that comes along much less often than once in a lifetime: a perfect, and perfectly preserved, giant squid. But what does it mean when the creature suddenly and impossibly disappears?
For curator Billy Harrow it's the start of a headlong pitch into a London of warring cults, surreal magic, apostates and assassins. It might just be that the creature he's been preserving is more than a biological rarity: there are those who are sure it's a god.
A god that someone is hoping will end the world.
- "The Reapers are the Angels" by Alden Bell (through the courtesy of Pan Macmillan);
God is a slick god. Temple knows. She knows because of all the crackerjack miracles still to be seen on this ruined globe...
Older than her years and completely alone, Temple is just trying to live one day at a time in a post-apocalyptic world, where the undead roam endlessly, and the remnant of mankind who have survived, at times, seem to retain little humanity themselves.
This is the world she was born into. Temple has known nothing else. Her journey takes her to far-flung places, to people struggling to maintain some semblance of civilization – and to those who have created a new world order for themselves.
When she comes across the helpless Maury, she attempts to set one thing right, if she can just get him back to his family in Texas then maybe it will bring redemption for some of the terrible things she's done in her past. Because Temple has had to fight to survive, has done things that she's not proud of and, along the road, she’s made enemies.
Now one vengeful man is determined that, in a world gone mad, killing her is the one thing that makes sense…
- "Dark Faith" edited by Maurice Broaddus and Jerry Gordon (through the courtesy of Apex Book Company);
The destructiveness of passion, both earthly and supernatural, makes cities bleed and souls burn across worlds, through endless time. Experience the spiritual side of the zombie apocalypse in “The Days of Flaming Motorcycles” and transcend both hell and nirvana in “Zen and the Art of Gordon Dratch’s Damnation.” Look into “The Mad Eyes of the Heron King” to find the beautiful brutality written in the moment of epiphany or “Go and Tell it On the Mountain,” where Jesus Christ awaits your last plea to enter heaven—if there is a heaven to enter when all is said and done.
Horror’s top authors and promising newcomers whisper tales that creep through the mists at night to rattle your soul. Step beyond salvation and damnation with thirty stories and poems that reveal the darkness beneath belief. Place your faith in that darkness; it’s always there, just beyond the light.
- "Burning Skies" by David J. Williams (through the courtesy of David J. Williams);
In his electrifying debut, The Mirrored Heavens, David J. Williams created a dark futuristic world grounded in the military rivalries, terror tactics, and political wrangling of our own time. Now he takes his masterful blend of military SF, espionage thriller, and dystopian cyberpunk one step further—to the edge of annihilation . . . .
Life as U.S. counterintelligence agent Claire Haskell once knew it is in tatters—her mission betrayed, her lover dead, and her memories of the past suspect. Worse, the defeat of the mysterious insurgent group known as Autumn Rain was not as complete as many believed. It is quickly becoming clear that the group’s ultimate goal is not simply to destroy the tenuous global alliances of the 22nd century—but to rule all of humanity. And they’re starting with the violent destruction of the Net and the assassination of the U.S. president. Now it’s up to Claire, with her ability to jack her brain into the systems of the enemy, to win this impossible war.
Battling ferociously across the Earth-Moon system, and navigating a complex world filled with both steadfast loyalists and ruthless traitors, Claire must be ready for the Rain’s next move. But the true enemy may already be one step ahead of her.
- "Instinct" by Jeremy Robinson (through the courtesy of Thomas Dunne Books).
A genetic disease known as Brugada Syndrome kills its victims without warning, without symptom. When the President of the United States falls victim to a weaponized and contagious strain of the disease, the Chess Team—King, Queen, Rook, Knight and Bishop—are assigned to protect Sara Fogg, a CDC detective, as she journeys to the source of the new strain: the Annamite Mountains in Vietnam. Surrounded by Vietnam War era landmines, harsh terrain and more than one military force not happy about the return of American boots to the Ho Chi Minh trail, the fight for survival becomes a grueling battle in the humid jungle.
Pursued by VPLA Death Volunteers, Vietnam’s Special Forces unit, the team’s flight through a maze of archaic ruins reveals an ancient secret...a primal secret that may stop the disease from sweeping the globe—even as it threatens both the mission and their lives.
Thank you all very much!
Posted by Mihai A. at 11:16 AM

Well, it is an ARC. And indeed I feel very lucky :)