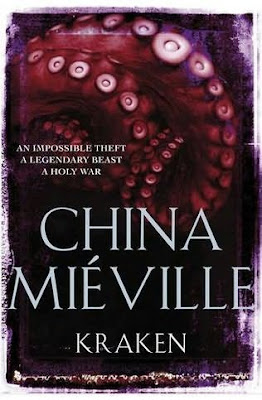 "Kraken"
by China Miéville
Format: Hardback, 400 pages
Publisher: Pan Macmillan
Review copy received through the courtesy of the publisher, Pan Macmillan
Deep in the research wing of the Natural History Museum is a prize specimen, something that comes along much less often than once in a lifetime: a perfect, and perfectly preserved, giant squid. But what does it mean when the creature suddenly and impossibly disappears?
For curator Billy Harrow it's the start of a headlong pitch into a London of warring cults, surreal magic, apostates and assassins. It might just be that the creature he's been preserving is more than a biological rarity: there are those who are sure it's a god.
A god that someone is hoping will end the world.
The best novel I read so far this year was China Miéville’s multiple awards winner “The City & The City”, therefore the reasons for reading his latest published novel, “Kraken”, were very obvious for me.
“Kraken” is madness. A whirlwind, urban, religious and humorous madness. China Miéville crafts a strange story that leads the reader within a secret London, one that is full of cults and magic and that works according to its own laws. Getting involved with the story doesn’t come easy, the start of the story is a bit difficult, the plot and the language are dense, the dialogues seem misplaced, everything requiring the full attention of the reader every step of the way. Once the story advances and I managed to settle my full attention on the reading however the novel became a strange but amazing journey.
A journey that took me deep within a city that pulses (literally), with many cells that are missed by the majority of its common inhabitants, but palpable for those who know they are there. London is truly a living organism in “Kraken”. Billy Harrow, the main character of the novel, discovers this organism and many aspects that gravitate around it, hierarchy, religions, laws and culture. Through the eyes of Billy Harrow the reader will discover a sociology manifest hidden between the layers of the story. “The City & The City” was an approach on sociology made by China Miéville, but “Kraken” feels even more so. With a humor both light and dark aimed on places towards our modern society China Miéville deals with many elements that influence our living one way or another, TV shows, movies, music, books, Internet and the list can go on.
In “Kraken”, London faces the apocalypse, but it is not for the first time. With numerous religious and cult groups, each one of them with its own vision and prediction of a catastrophic event, the city saw and sees such events with constancy worthy of a show. And this can very well be another parody of our modern society, because it certainly led me thinking of many apocalyptic scenarios we faced: eclipses, turns of millennium or ancient prophecies. Facing this latest apocalypse is an extensive list of characters. Lead by the curator Billy Harrow the list is colorful and spreads wide including Dane Parnell, an acolyte and bodyguard of the Church of God Kraken, Kath Collingwood, a policewoman with a supernatural ability, Wati, an ancient Egyptian spirit who is the head of a union of familiars, Goss and Suby, two very mean and dark assassins, and The Tattoo, one the main villains who is literally a tattoo. And this is just to name a few, because there are others as well with a more or less presence within the story. But as colorful as this cast of characters is not even one makes a boring presence, each one enriching the story.
“Kraken” is an excellent example of how urban fantasy should be made and although the engagement with the story requires a bit of patience from the reader that doesn’t ruin the pleasure of reading this novel. I feel that the novel didn’t reveal all its mysteries to me in this first reading and that a second one will show me new dimensions of the story. In the end, “Kraken” is a literary induced dream and China Miéville is the dealer providing it.
Posted by Mihai A. at 12:31 PM

Sounds like a truly interesting read. Will have to add this one to my to-be-read list. Thanks for sharing your thoughts.

This goes on the TBR list, for sure. Thanks for taking the time to write this one up!

Cassandra & Barbara, I highly recommend "Kraken". It is an excellent novel :)

The more reviews of Kraken I read (your review is the latest one and a real good one) the more I want to read it on my own. I received the copy I bought this week. But first I need to finish some other books.

Thank you very much :)
I hope you'll like it when you get the chance to read it.