"The Darkness That Comes Before" by R. Scott Bakker 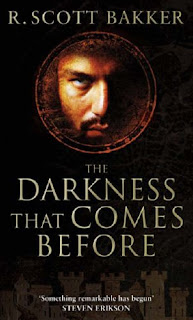 "The Darkness That Comes Before"
by R. Scott Bakker
Format: Paperback, 656 pages
Publisher: Orbit (UK)
I have to admit that I have read some reviews before reading the novel and I have to say that those praises are deserved.
Basically the novel is about a holy war, about a coalition of nations that try to recapture the holy city of Shimeh. But this I think is the bigger picture and the set for the next novels in the "Prince of Nothing" trilogy. Mainly in this novel we follow the stories of the main characters, stories that lead us to the central plot. We have the story of Kellhus Anasurimbor, a northener in search of his father, after he hears his calls in dreams. There is Drusas Achamian, a Mandate sorcerer and a spy, sent by his school to find out information about Maithanet, a new spiritual leader that starts the Holy War. Another character is Cnaiur Urs Skiotha, a barbarian, chifteain of a Scylvendi clan, who is seeking revenge after a heavy defeat in battle. And he tries to revenge on a man that he thinks is responsible for his failure, Kellhus' father. We have the Emperor Ikurei Xerius that sees the opportunity to expand his empire through this Holy War, even though he despises and fears his nephew, Conphas, the general of his army. And also we find two female characters, Esmenet, a prostitute that follows Drusas, and Serwe, a concubine saved and used by Cnaiur and Kellhus.
"The Darkness That Comes Before" starts slowly, R. Scott Bakker takes his time in introducing the characters and the plot, and this may seem a little bit boring. But the good things come for those who wait and after I advanced in reading I found the action very interesting. But this pace helps you discover the world created by the author, a world that I truly enjoyed. R. Scott Bakker creates a real and believable world, with history behind it, with conflicts and with interesting religion. And because of the author's attention for this details his world has a great depth.
The characters are another strong point of this novel. The author doesn't limit his characters to the general definition of good or evil, he creates them with great talent, giving them strenghts and weaknesses, with well build background. I love the character Kellhus, he seems very selfish, doing things that are only in his interest and using people to achive them. But also he is capable of love, compassion and friendship. So it is hard to categorize Kellhus, but this is what makes him so fascinating and unique. Another character that I love is Cnaiur, a strong warrior, intelligent and with his actions dominated by force. He follows his clan brutal traditions, but is renegade by his people, and this contribues to his hate and desire of revenge. Drusas Achamian is the only character that tends toward one scale of the balance. He has the most human emotions, has inner conflicts and I see him as rather a good character, but I don't know what the outcome will be. The emperial figures look like true royalty, with selfishness, with materialism and with paranoid thoughts. The female characters are intriguing, guided by emotions.
Overall I loved "The Darkness That Comes Before" by R. Scott Bakker, it reminds me of the greatest works of fantasy, and certainly is part of those great works. I will have to look quickly for the other two books of the serie because I think the best part is yet to come. This novel is a "must have" for all fantasy lovers.
Posted by Mihai A. at 4:25 PM

Oh, I am so thrilled for you new blog, definitely cool and the review is also handled very well, even though I tend to aim at a more contemporary fiction. I still love Tolkien.

Thank you very much. Your encouragement means a lot.
I also love Tolkien and soon I will receive a copy of "The Children of Hurin". Thank you once again.

That reminds me that I still have some works of his that I would like to read someday.

You are very much welcome you know. It's good to support one another.

Thank you once more :)

I don't know if you have read the rest yet, but you should, because its well worth it. Besides, the judging eye, the start of a new trilogy based on the same characters is coming out in 2009 !

I will certainly read them, but I didn't managed to buy them yet. They are on my Christmas shopping list. And definitely I will read them before the publication of "The Judging Eye" :)

Sorry to have a random break in but after reading the Prince of Nothing trilogy this summer I've really been wanting to find news about his next book, seeing as how the last book ends. Any news at all on the release date for the Judging Eye.

Well, as I know "The Judging Eye" will be released in January, 15 from Orbit Books UK in paperback format and January, 22 by Overlook in US in hardcover format.
Now, if you visit the blog Fantasy Book Critic you can win an advance copy of it and the hole trilogy "Prince of Nothing" (if you live in North America, because the giveaway is restricted for that area) and the blog Pat's Fantasy Hotlist for another advance copy of "The Judging Eye".
I hope this helps you and good luck :)