"A Game of Thrones" by George R.R. Martin 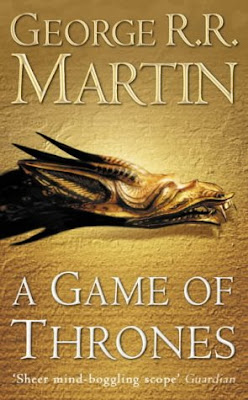 Tomorrow is my birthday and to celebrate that I will give myself a gift posting an older review of mine, but a review of one of my most favourite books.

The world of literature would be far more poorer without George R.R. Martin. The author who was nominated and won the Hugo, Nebula, Bram Stoker and World Fantasy awards creates a novel "A Game of Thrones", the first volume in "A Song of Ice and Fire", that made me say only one thing: WOW.

"A Game of Thrones" describes a fantasy world, named the Seven Kingdoms, that resembles medieval Europe and the events that unfold in the novel are very much the same with those from that part of history. The novel has three storylines, not one like many others.

In the first storyline, Robert Baratheon, the king of Westeros after he claimed the crown in battle, visits his old friend, Eddard Stark in Winterfell. Robert asks his friend to become The King's Hand, second in charge of the kingdom, after the mysterious death of the former Hand. So the Stark family, one of the most powerful in the land, is split up. After the return of the king in the capital city, named King's Landing, starts a teribile fight for the throne that involves the Starks and the Lannisters, the queen beeing a decender of the Lannisters.

The second storyline follows the events that occur at the northern border of the land, here lies the Wall, a construction that protects the country from the invasion of the mysterious creatures known as The Others. The story is centered on Jon Snow, bastars son of Eddard Stark, who is recruited in the Night's Watch, the men who maintain and guard the Wall.

The third storyline is set on a continent east of Westeros where we find the Free Cities. Here had refuged Daenerys and Viserys Targaryen, the last known relatives of the previous king and they seek an army to help them retake the country and revenge the death of the king.

The author mixes brilliantly the three storylines so I was never in difficulty when I followed them. The intrigue is complex, surprising, following political conflicts, the struggle for power, betrayals and love stories, and the twists of the situations do the reading more pleasant. And even though the novel has many characters this fact doesn't prevent me in savoring the read, because George R.R. Martin describes them very well, so well that you get attached to the characters. But here I have to warn you, because the author keeps the realism of life in his novel, the characters that we love can die as fast as those we don't find very attractive.

I was thrilled about the fact that the author tells the story through different characters, so we benefit of different points of view about the same events, and this contributes to the atmosphere of the novel. And even though George R.R. Martin doesn't create an entirely new world, in the true sense of fantasy, he comes with many new and original elements like The Others or the cycle of seasons, for example the winter can last a lifetime. At the end of my reading the author left me wishing more,with joy and sadness, and also with questions about the next books in the serie. And if those are equal to "A Game of Thrones" I will be very happy.

The novel has some weak points, but this are very few and honestly I don't want to recall them, so I will give the novel 10 points out of 10.

Mhm, I have seen this one lying around in book stores, but never got around to buying it, cause it was a long series and well the book was big. After Lord of the Ring, which was all three books in one hefty volume I kind of avoid them, cause it's a lot of time on one thing. Sounds like an interesting book to read. Might do it one day.

I really liked this the first time I read it, though it did have portions that dragged somewhat. Haven't got around to the others in the series still, but I have been meaning to for some time now...

It is a great read. May seem a very thick book but is a very good one and can be read fast. And I also didn't read the next in the serie, but it will happen soon.

I have read the 5 books of A Song of Ice and Fire Chronicles and I have enjoyed most of them, of course the first one, A Game of Thrones was very important because if hooked me. My favorite character is the Imp (Tyrion Lanister) because of his wit. I have written a review also of the first book, I only came across these books around 2011 and only wrote the review a couple of months ago. Keep up the good job.

Thank you very much, Sandro! I enjoyed this series a lot and I do plan to read it again. Hopefully, I'll be able to do that sooner than later. :)