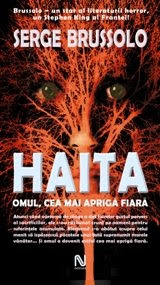 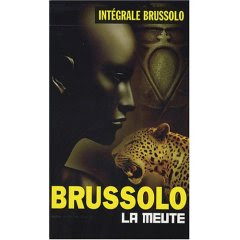 This review is a bit awkward because I've read this book in romanian and I don't think that had been published in english yet. The title means "The Pack" and as you can see from the cover arts, on the left is a french edition that you can find on Amazon.fr and on the right is the romanian edition published by Nemira publishing house. But I will post this review because it is the last book I've read.
On the cover of my book Serge Brussolo is named Stephen King of France, and the statement isn't far from mark.
The streets of Paris are haunted by a killer who is called by the press, The Skinner. The Skinner attacks only women, and his victims miss the scalp and the parts of the skin covered with hair. The Skinner is Georges Mareuil-Mondesco, a solitary figure, the only successor of a high society family. Georges is helped by an young lady with an unfortunate past, Sarah. But what is behind this criminal mind, what are the feelings that drive him? Why Georges refuses to visit the place where he keeps the "souvenirs" taken from his victims, the place found in his father's museum of stuffed animals? What is the link between all this and the stuffed animals?
The novel of Serge Brussolo is very much like a play, the action takes part most of the time in the same set, Georges Mareuil-Mondesco's huge property. We have only two characters, Georges and Sarah, and the events are unfold in acts. The plot is original and it kept me interested until the novel's end.
I enjoyed the characters of this novel. Serge Brussolo proves a very good knowledge of human psychology, creating his characters with excellent realism. Their thoughts, feelings and fears are described very well, confering depths to the characters. Georges, with a childhood lived in his father's shadow, is trying to live up his expectations, but failing almost every time. Isolated, considered freak by the other children, he developes phobies that will affect all his life. Sarah, an young girl raised in an orphanage, with a tumultuous history, becomes Georges' assistant through a more or less unfortunate circumstances. She will be forced to confront her past as well as her present.
The novel's action is hallucinating, terrifying, at the limit of reality with imagination. The author is very careful with the details, the scenes being described with attention. The violent scenes are combined with scenes of an excessive sexuality and that creates grotesque images with great impact on novel's atmosphere. And if I mentioned the name of the Stephen King of France, I have to say that this novel reminded me of King's "Gerald's Game" and Dean Koontz's "Intensity". Same great characters, same thrilling action and the same unexpected finish.
I liked "La Meute" of Serge Brussolo. Because of the author's efforts and the attention in characters' psychology, it was easy to get attached to them and to follow the action. In time I'm sure that I will read once again this novel. I will definitely recommend this novel.
Posted by Mihai A. at 10:57 AM