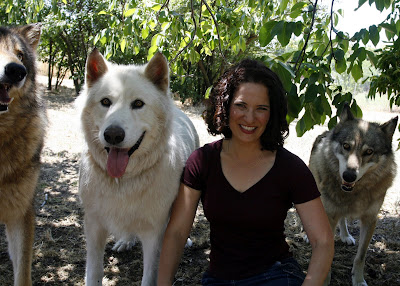 Before the wolves barged in the door, demanding that their story be told, Dorothy Hearst was an acquisitions editor at Jossey-Bass, where she published books for nonprofit, public, and social change leaders. She loves dogs but doesn't have one, and borrows other people's whenever she gets the chance. After seven years in New York City and nine years as a San Franciscan, Dorothy now lives in Berkeley, California. She is the author of "Promise of the Wolves" which I recently reviewed on my blog.
Dark Wolf: I see that your career is in close relationship with books, being an editor and now a writer. Can you trace your interest in books?
Dorothy Hearst: I don’t remember a time when I was not surrounded by books. When I was growing up, we had books in the family room, books in our bedrooms, and floor-to-ceiling bookshelves in my father’s den. And we would go to the library about once a week to check out more books. I was very surprised when I found out that other people’s houses weren’t full of books.
Dark Wolf: Knowing both sides of this industry which one is your favorite, if any, the editor or the writer? Was it difficult to cross from one to the other?
Dorothy Hearst: I really enjoy both. As an editor, I had the opportunity to work with really wonderful people and to help them share their ideas and vision with the world. I got to be a part of helping so many books come into being. As a writer, I get to go very deeply into one book at a time, and to have my entire life taken up by it. I get to submerge in the world of my wolves and find a new understanding of the craft of writing through this intense involvement.
It was quite easy to cross from one to the other. I worked with nonfiction books as an editor, so I didn’t feel that the work was too similar, and everything I learned about book-crafting as an editor helped me as a writer.
DW: Reading your debut novel made me assume that you are fond of animals, am I right? What inspired you for this novel and why did you choose wolves as main characters?
DH: The wolves chose me. I’ve always loved dogs, and have always been fascinated by our relationship with them, and with how remarkable it is that we are so drawn to them, and they to us. I started wondering how that came to be. It’s such a visceral feeling that I was sure it had to go far, far back into our history and theirs. How did a wild wolf evolve into this creature that is so much a part of our lives? Then, I heard someone say “I’m going to write a book about how the wolf became the dog, from the wolf’s point of view.” I looked around to find out who had spoken, and when it was clear that no one else was in the apartment, I figured I could claim the idea as my own.
I also believe that our relationship with the animals we share our lives with holds the secret to whether or not we will be able to take the steps necessary to save our environment.
DW: The amount of research must have been huge. Did you get the chance to study the wolves up close? 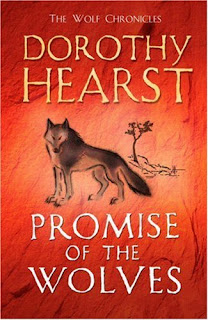 DH: I did! My first wolf encounter was at the Cleveland Zoo. I was at a conference for work, and the novel was still in the idea stage. I found out that The Cleveland Zoo has a wolf habitat. So I snuck away from the conference and watched the wolves for ages, and peppered the zoo’s wolf expert with questions. Then, at his recommendation, I went to Yellowstone on a wolf watching trip where I got to observe wolves in the wild. I went to a couple of wolf sanctuaries, and then found my way to Never Cry Wolf Rescue, which finds homes for wolf and wolf hybrids that people have tried and failed to keep as pets, and also takes ambassador wolves to schools and other places to help educate the public about wolves. These guys agreed to pose with me for some photos, so I actually got to pet wolves, and feed them treats. I also got to hang out with a three month old wolf pup, definitely one of the most amazing experiences of my life.
Most recently, I went to the International Wolf Center in Ely Minnesota, where I got to see their pack and watch the new pups, which was incredible.
DW: The wolves were and are seen as a menace, and almost exterminated, even though they do not attack humans unprovoked and for instance bears are made in nice children toys in spite their known attacks on humans. What do you think made humans act like this?
DH: This question is one of the things that inspired me to write "The Wolf Chronicles". I really do believe that there’s an ancient and very profound link between humans and wolves. We have such a visceral and instinctive response to both wolves and dogs that something had to have been wired into our brains pretty early on in our development. Also, wolves and humans have strikingly similar social structures—much more so than humans and chimps. That’s why dogs fit so easily into our lives—wolf societies and human societies have so many similarities that we can transfer our social attachments to each other. Plus, wolves represent the world of nature and wildness that we’ve lost, and yet they seem so familiar to us, and so we are drawn to them. I believe that some people hate wolves for the very same reason. Because they are so similar to us, and because they are wild animals, people feel threatened by them. Some people see them as competition some see them as an incarnation of evil when there is no cause to do so. Wolves, to some people, represent the fear of the unknown and the fear of the wild.
DW: What about the ravens, did they get a lot of research too?
DH: They did. The work of Bernd Heinrich was especially helpful. Both wolves and ravens have the ability to form social attachments and they seem to have evolved over many years to form these attachments with each other. Ravens often scavenge from wolf kills, but it’s also believed that ravens lead wolves to carcasses or possibly even to live prey. Ravens and wolves have also been observed playing together. I used a lot of this material in developing the raven characters and their relationships with the wolves. Ravens are also often trickster characters in mythology, and I used that, as well.
DW: Who do you recommend your novel to? Did you have a specific re 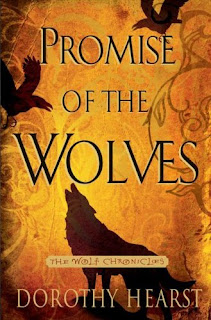 ader target in mind when you’ve start writing the novel?
DH: When I was writing "Promise of the Wolves", I really wanted it to appeal to both adults and young readers. It was important to me to have the wolves speak to both, and my favorite books are those that reach readers of all ages. Other than that, I think it’s for anyone who wants to spend a little time in another world, or who wants to see their own world in a new way. Or for anyone who’s ever wondered what’s going on between the ears of the wolf in their living room.
DW: Does your wolf characters resemble real persons or was inspired by one?
DH: Kaala was pretty well-formed as a character right from the beginning, so I’m guessing there’s a lot of me in her. Other than that, all wolves are fictional characters. Any of my friends who see themselves in the wolves are imagining things. . .
DW: After I finished “Promise of the Wolves” I couldn’t stop wondering what happened to Borlla. It will be explained in the next novels of the trilogy or it will remain a mystery?
DH: Borlla’s fate will be revealed in the next book.
DW: What the readers should expect from Kaala and her friends in the future titles?
DH: Kaala and her friends will continue to try to work out the complex relationship between wolves and humans while also dealing with the somewhat questionable motives of all the wolves in the valley. They’re adolescent wolves now, and some of the protections of childhood will be removed. They will be tested, both by things that happen to them and by their own fears and personal obstacles. And there’s romance in Kaala’s future!
DW: Did you structure already your next novels in “The Wolf Chronicles” or changes may appear until the publishing time?
DH: I’d originally thought of it as one book, so while I have the overarching story in place, much continues to change as I write.
DW: Your novel having an ecological and environmental message, do you believe that our relationship with animals is important for us to avoid our planet destruction?
DH: I do. I think that if we want to reverse the trend of environmental destruction, we must change the way we think of ourselves in relation to the natural world.
Seen through the eyes of a wolf, we humans are a species who have lost our way by losing our connection with our physical environment. Many brain scientists believe that our brains evolved to seek the difference between "self" and "other" (my tribe and other, my country and other, my species and other). This mindset, which may have served us well when we were fighting for survival as early humans, is now leading us to our own destruction as we destroy an environment which we consider to be "other."
The wolves provide us with our strongest remaining connection to the natural world-dogs, the one creature that we think of as part of our families, and part of self. "Promise of the Wolves" and "The Wolf Chronicles" trilogy set forth the idea that if we can love something outside ourselves, we can find our way back to being a part of the world we live in, and perhaps stop destroying it.
Thank you very much for your amiability and for your answers. It was an honor and a pleasure.
Posted by Mihai A. at 10:45 AM

when will you publish your next book

I think the book doesn't have a publishing date yet. I hope it will be soon :)

I really can't wait for the next book! Does it have a publishing date yet?

Unfortunately, I am not aware of the publishing date for the second novel yet.