"Promise of the Wolves" by Dorothy Hearst 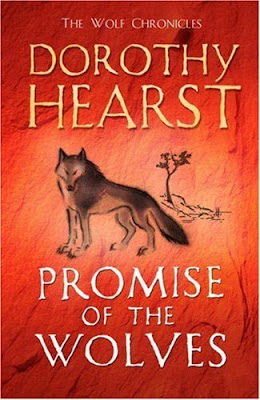 "Promise of the Wolves"
by Dorothy Hearst
Format: Hardcover, 352 pages
Publisher: Simon & Schuster
Dorothy Hearst’s debut novel “Promise of the Wolves” is the first one in “The Wolf Chronicles” trilogy.
Kaala is a she-wolf born in the Swift River pack, but with a mixed blood, her father being an outsider of the Wide Valley. Because of her heritage she is almost killed by the pack leader, saved by the Greatwolves, and her mother is cast away from the pack because she broke this rule. Kaala bears the mark of a prophecy also and she is seen with bad eyes and dangerous by some members of the pack because of that mark. After her encounter with humans it seems that that prophecy is about to be fulfilled.
“Promise of the Wolves” is set 14,000 years ago and I could see a prehistoric world. Beside the wolves which are the main characters of the story, the world is inhabited by mammoths, long-teeth, elkryn, ravens, which are very funny and made me laugh a couple of times, and humans, still at the beginning of their development. I liked how Dorothy Hearst describes the wolf pack, and I could read about the hierarchy in such a pack, about the body language of the wolves, about the hunting techniques and in this sense her novel is like a documentary. And so my love for dogs and wolves was satisfied by the realism of the descriptions.
The novel is centered on Kaala and the story follows her first year of living. Dorothy Hearst builds a strong character in Kaala and one that is enjoyable. “Promise of the Wolves” follows her story and I could see her difficulties, her joys and sorrows. I could see Kaala trying to survive a harsh world, trying to make friends and trying to become a member of the pack. I liked the trials that the pups have to pass to become a member of the pack and a true wolf. I liked to see them trying, to see their feelings and the relationship between themselves. Sometimes Kaala and the other pups encounter difficulties and situations that resemblance our human problems that for some moments made me forget that the characters were wolves.
I enjoyed the ravens too and their presence made the novel more enjoyable. I liked their rhymes and their annoying, but humorous, remarks and Tlitoo is a character as strong as the wolves are. I liked the link between the wolves and the ravens and the story made me see these birds in a different light. The relation between wolves and humans is an interesting one and as I read I could see the relation that we make with dogs. Throughout my reading I asked myself about our attitude towards the animals that inhabit our world and our behavior towards the world we live in.
Dorothy Hearst’s “Promise of the Wolves” made me ask myself once again why the wolves are seen as a menace and why they were hunted down almost to their extinction point.
Posted by Mihai A. at 9:18 AM