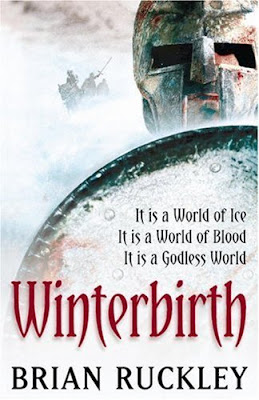 "Winterbirth"
by Brian Ruckley
Format: Paperback, 560 pages
Publisher: Orbit Books
“Winterbirth” is the debut novel of Brian Ruckley and it is an epic fantasy set in a world that resemblance medieval Europe.
The northerner inhabitants of this land, named the Bloods of the Black Road, start a quest to retake what they consider to be their former territory. They attack and take a few towns set on their southern frontier, but their attacking force is deemed because is composed by one single clan from their Bloods. Also their leader tries to fulfill a promise made to his dying father and the southerners face their own animosities and ambitions.
The story made by Brian Ruckley is a complex one. On the panel of the principal plot the author develops some attracting subplots, ancient conflicts, ambitions, treasons and religious fanaticism. At start the novel can be confusing, but as I advanced it unfolded its layers in a hooking manner and I was caught until the end. At first the names contributed to my confusion, they resemble Gaelic language, but after I get used to them I didn’t had any problem.
I think that the strongest point of the novel is the worldbuilding. Brian Ruckley introduced me in a harsh world, but a carefully build one. He shows glimpses of the past of this world (and I hope that he will develop this idea in the next novels of the series, because I find it interesting) and leads the reader to the present background. The world is inhabited by five races (four actually, because one is extinct) and every one of them has its own particularities. I liked how the author build this races, every one of them with its own believes, with its own rituals and its own principles of conduct. The two major races present in “Winterbirth” are divided in two major fractions that are in conflict one with another. I liked how the author divided the races as well, the Kyrinin between the White Owl and Fox clan, with their conflict, and the Huanin, between North and South with their old religious conflict. The Huanin are ruled by different Bloods, which is the ruling class, and every Blood has his own ambitions and conflicts, seeking their own interest in wealth and power. Very interesting characters are the na’kyrims, a crossing between the Kyrinin and Huanin, and they are the only ones capable of using magic (which is only slightly presented in this novel).
Another strong point of the novel is the characterization. I like how the author builds his characters, how he grows them and how the author speaks through them, presenting their stories in a manner that doesn’t incline the balance in the “good” or “bad” sides. Some of them didn’t attract me too much, not that I didn’t like their stories, and some of them I really liked. And I’m very interested in following their course. I liked Kanin, a northerner invader, the heir of the Horin-Gyre Blood, I liked Mordyn Jerain, the chancellor of the Haig Blood, Taim Narran, one of the military commanders of the Lannis-Haig Blood fighting forces and some of the Inkallim, these being the elite forces of the North and ones that I find very attractive.
Other thing that I really liked was the battle scenes. Brian Ruckley did a very good job here, and I was under the impression that these scenes are visual. The author manages to create a realistic image of battles, with a very pleasant feeling of motion, with well constructed tension and with running action. I liked also some things that I think are only partially introduced in the story, like the magic, used only by the na’kyrims and the religious aspect and the story behind this aspect. I will look forward for these aspects in the next novels of the trilogy.
Brian Ruckley’s “Winterbirth” is the first novel in “The Godless World” trilogy, one which is a very entertaining and catching, which pleased me a lot.
Posted by Mihai A. at 11:26 AM