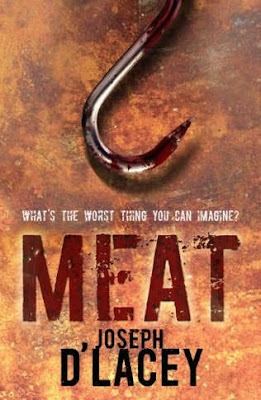 "Meat"
by Joseph D'Lacey
Format: Paperback, 320 pages
Publisher: Bloody Books
Joseph D’Lacey’s novel, “Meat”, has a comment from Stephen King on its cover and this can turn the interest of many readers. But this comment can work on both ways so it can turn against the novel.
The town of Abyrne is a decaying town, positioned in the middle of a wasteland and that depends heavily on the meat supplies. These supplies are provided by Magnus Meat Processing Plant, but it seems that the quantity is insufficient for the whole town. Richard Shanti works in the slaughterhouse of MMP and is nicknamed “The Ice Pick” because of his efficiency. But he has doubts about his work and about the entire process of obtaining meat. He is investigated by the local church and also he meets a man with a different vision about the city survival. And all this will make a sudden turn in his life.
I will admit from the start that I like eating meat. I will admit that I know from where the meat comes, I know the process of obtaining it and I know that slaughter houses can be a cruel place, but this novel made me think again on this entire process. Joseph D’Lacey's idea for his novel is good, he creates “the cattle” that provides the meat in the novel in the most shocking method. This image of “the cattle” is grotesque and disturbing, but the story behind this image fails to sustain it. After the initial shock and horror created by “the cattle” image I wasn’t shocked or surprised by anything else. And this is a great minus for a horror novel in general and for “Meat” in particular. Also a lack for this horror novel is the lack of many action scenes. And the general action although moves steadily, it moves to a predictable end.
The characters failed to wake up my interest. They seem a little shallow and they act in concordance with what they believe to be right or wrong, but without the reasons that stay behind their beliefs. The story is told from the perspective of a number of characters. But this contributes fully at their lack of development and at my indifference for any of the characters. Actually one of them did stir my interest for a bit, Parson Mary Simonson, but what would have been a very interesting inner conflict is vaguely treated. So I lost interest in this one, too.
The setting would be interesting also, but again its development fails short. The novel is a dystopian, set in a post-apocalyptic world. But the novel has many questions unanswered like what made the world a huge wasteland, why Abyrne is the only surviving town, why “the cattle” developed in its present state and who is behind the new religion and the new lines of conduct preached by the new Bibles, “Gut Psalter” and “The Book of Giving”. I liked the idea of the new religion and I would have liked to see it developed. But even though I found it the most interesting one I found it the least developed one, too. And a potential interesting conflict between the cleric and the laic is touched only on the surface. And considering that this is a dystopian novel I find hard to believe that humans can feed themselves only on spiritual level and only with sun light.
Like I said in my introduction a comment from Stephen King on the cover of a novel can work in both ways, but with all the respect for the work made by Joseph D’Lacey in writing his novel, “Meat” fails to meet any of my expectations.
Posted by Mihai A. at 10:28 AM

I've found that novels that have too many POVs often fail short for me--mainly because I can't get interseted in any of the characters. Really, I prefer one POV. Two if the author must. Anything past that and they will probably lose me. I'm just not an in-depth enough reader to care enough.


As a writer, you watch. I'll find myself needing that third POV someday and rue these words...

Mihai, great review as always, I have this on my reading list but was a bit put-off (by the blurb)that it may be trying too hard to get a message across at the expense of a story. Sounds from your review like that might be the case?

Maria, I usually don't mind if a book has many POVs and that because I'm a fan of epic fantasy. I don't like it when the presence of many POVs ruin the book.

Colin, thank you very much. Yes, unfortunately it is the case and I believe tht the story is sacrificed over the message.

To be honest I don't like horror. Your review - which is good - convinced me tha this isn't a book for me.

Thank you, Michael. I'm fond of Horror novels and I like to read this genre from time to time :)

Hard to take ur review seriously when it contains so many grammatical errors.

Bad for the reviewed author as ur review is listed at the top of a Google search.