A meme & a contest

I've spotted this meme on Chris Roberson blog, Roberson's Interminable Ramble. I found this one pretty interesting, so I'll do my birthday meme too.

Look up your birthday in Wikipedia. Pick 4 events, 3 births, 2 deaths, and 1 holiday.

I had fun a lot of fun doing my meme, so I warmly recommend doing yours. 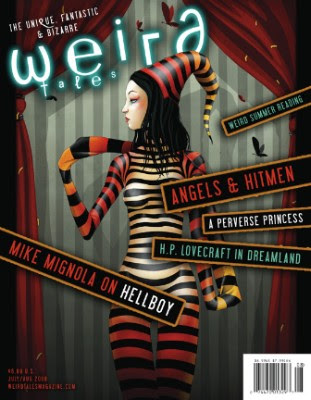 I stumbled upon another very interesting contest. Matt Staggs is offering on his interesting blog, Enter the Octopus, a chance to win a free copy of the July/August 2008 issue of "Weird Tales" magazine. I've always wonder if I should make a subscription for this magazine, it made me very curious about its content, so I grabbed the opportunity to sign up for this contest. If you would like to win this free magazine you can find the rules at Enter the Octopus. Good luck.
Posted by Mihai A. at 10:16 AM

One more contest I had to sign in
because you mentioned :-)

By the way I like Hellboy and H.P. Lovecroft.

I keep my fingers crossed for you.

And me for you, Michael :)
I think next week I'll suscribe to this magazine.