"School's Out" by Scott Andrews 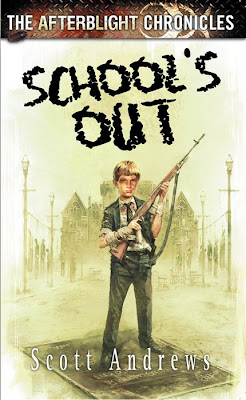 "School's Out"
by Scott Andrews
Format: Paperback, 320 pages
Publisher: Abaddon Books
I have to admit that I have a weak spot for the post-apocalyptic scenarios no matter if they are treated by movies, games or novels. Scott Andrews’ “School’s Out” picked up my curiosity because it is a post-apocalyptic novel.
After an apocalyptic event, The Cull, which killed all the humans that didn’t had O negative blood many students come back to their school, St. Marks School For Boys, in search for a shelter. Among them is Lee Keegan, a fifteen years old boy, which awaits his father to return here. But the school resemblance a military facility now and the surrounding ground a battlefield.
“School’s Out” is pretty much what it states it is, an action novel set in a post-apocalyptic world. The novel is written from the perspective of the main character, Lee Keegan. I was introduced since the beginning of the novel in the general scenario and the author manages to create since start interesting characters. Even though the majority of them doesn’t benefit from an in depth characterization, the two main ones are pretty well build. Besides Lee Keegan, a character that made me sympathetic to his sufferings and its own moral questions, I discovered Mac to be a strong character. Mac is a former prefect of the school that used to bully the small children and he’s in antithesis with Lee.
Scott Andrews starts his novel in a pretty fast pace, but after the initial part the action slows down for the first third of the novel. This first part focuses mainly on Lee’s difficulties to adapt to the new situation. Also here it’s built the conflict between Lee and Mac and the divergences between their ways of thinking. In their conflict I could see glimpses of the philosophical theme behind leadership, but this theme is touched only on its surface. The rest of the novel benefits from a lot of action, high paced and with rapidly succeeding events. All of these events are violent in a more or less grade and with a lot of bloodshed.
The novel had some elements that didn’t sit well with me. First of all, in a true Hollywoodian style, some characters refuse to die easily. It takes a great range of methods and an entire arsenal in order to deal with them. Another thing is even though the characters are children they fight on equal terms with grown-up men, in spite of size or strength. Also they seem to have no problem killing with ease other human beings, without having remorse or being mental affected. It is quite hard to believe that all of them will be hit by killing frenzy.
Scott Andrews’ “School’s Out” is not a philosophical or serious read and it will not force your mind. But it is a fun and relaxing read, very appropriate for lazy vacation days, which picked my curiosity for “The Afterblight Chronicles”, the novel being a part of this series.
Posted by Mihai A. at 10:57 AM

I love post-apocalyptic stories too! Thanks for bringing this book to my attention!