Cover Art - "The Rats and the Ruling Sea" by Robert V.S. Redick 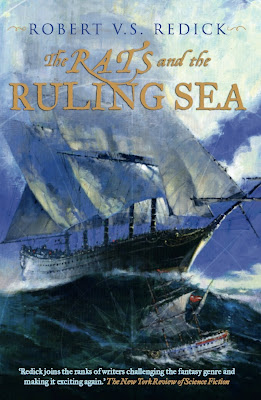 Robert V.S. Redick made his debut last year with the first novel in “The Chathrand Voyage”, “The Red Wolf Conspiracy”. The Gollancz edition published in February 2008 had a wonderful cover made by the very talented Edward Miller (Les Edwards). This year on August the second novel of the trilogy will be published, “The Rats and the Ruling Sea”, and like the first one it benefits from the artwork of Edward Miller. I really like that both covers follow the same line and general aspect and that gives Robert V.S. Redick’s series an interesting and catchy identity when it comes to cover art.
THE RATS AND THE RULING SEA begins where THE RED WOLF CONSPIRACY ended; Thasha's wedding is hours away. It is a wedding that will both fulfil the promise of a mad god's return and see her murdered. Pazel has thwarted the sorcerer who would bring back the god but both sides now face deadlock. Can Thasha be saved? Can the war between two Empires be stopped?
THE RATS AND THE RULING SEA is, once again, focused on the giant ancient ship, the CHATHRAND, but now she must brave the terrors of the uncharted seas; the massive storms and the ship swallowing whirlpools and explore lands forgotten by the Northern world, all the time involved in a vicious running battle with a ship half her size but nearly her match.
Robert Redick's new novel takes the reader further into the labyrinthine plots and betrayals that have underscored the trilogy from the beginning. We learn more about the Ixchel as they fight for survival against the Chathrand's rats, discover more about the true motives of conspirators, live with Thasha and Pazel as they face death and deceit, and as the Chathrand sails into the infamous Ruling Sea.
Robert Redick's sequel to the acclaimed THE RED WOLF CONSPIRACY is a masterpiece of plotting and adventure. As each page turns the reader shares with the characters the dawning realisation that nothing is at it seems.
Posted by Mihai A. at 12:02 PM

This sounds like an interesting book that I will be putting on my TBR list. Thanks for the review, Mihai.

I have the first novel in the series and I think I will have a review of it next month :)

I would appreciate to read areview of THE CHATHRAND VOYAGE. I'll et my paperback copy of the book in May 2009.

Michael, I think I will have one until May :)