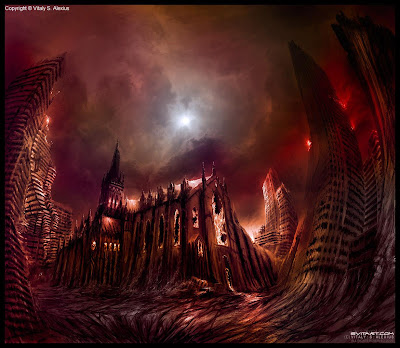 © The artwork presented on this post is used with the permission of its author. All the artwork is copyrighted. Please do not use the images without the permission of the artist or owner.
Vitaly Samarin Alexius was born in 1984 in the Siberian town Novokuznetsk. At the 11 years Vitaly started to study art in the city of Novosibirsk. In 1998 he moved to Toronto, Canada, where he is currently living. He continued his studies at the Ontario College of Art and Design, where he finished 2 years of “Environmental Design” and 2 years of “Illustration”. His talent is also manifested in photography and he is currently working at his first literature project which is also his thesis project, “Chronoscape” novel. Among Vitaly’s latest works we can find CD, books and comic covers, posters and concept art.
Interview - Vitaly S. Alexius

Dark Wolf: Vitaly, thank you very much for this interview. How did you become interested in art? What was your first encounter with art?
Vitaly Alexius: My very first art inspiration came to me in 1995, Novokuznetsk, Siberia…
On the gabled cottage roof, covered in wooden planks, moldings, and swirly carvings, I’ve met a local artist. He was drawing some kind of forest on his canvas, via the view from the rooftop. I admired his glorious skill and pondered what it would be like to become an artist myself. Later on, I was enjoying a nice hike via the good old Trans-Siberian railway of the Soviet Union, while climbing various green mountains, covered with lush vegetations, with my good friends of that time.
Upon the climb, we sat on the mountain side, enjoying the mid-day sun, bursting though the clouds, in an explosion of light rays that lived on their own accord, playing with the shadows of the mountains, forests, and fields below.
The wind rolled about the fields, creating a magical, wavy sea of orange grasses.
And at that moment on I’ve said to myself:
“Every artist has their style. Whatever shall be mine?…"
… and while staring at those rays of light I had decided- "I shall become the master of the landscape and the sky. And draw it in a manner of a tasty delicacy that can be consumed in large quantities via the spoon of visual perception- and thus the delectable sky full of light rays that you see in most of my works now, was born.”It took me (counts fingers)… 15 years to master those rays of light.
Dark Wolf: I grew up with my mother’s art albums and from them I learned and I fell in love with the Russian painters such as Ivan Aivazovsky, Valentin Serov and Ivan Shishkin. Do you like any of the Russian classic painters and do you find inspiration in their works? Do you prefer other artists as well?
Vitaly Alexius: Russian seascape painter Ivan Aivazovsky is core inspiration that defined my style. Aivazovsky painted the struggle of men against nature in a Romantic style. I pain the struggle of men against themselves in Romantically apocayptic style, a reinvention of Romanticism. I also enjoy works of Salvador Dali, Shishkin. As for modern digital artists – Craig Mullins and Sparth were a great inspiration, proving to me that an artist can be successful and well recognized just for Photoshop art.
Dark Wolf: You moved to Canada in 1998 and continued your art studies there. Did your perspective on art change after your move? How different is the Russian art school than the Canadian one?
Vitaly Alexius: Living in Siberian Soviet Russia has given me a great art education and provided me with an experience of two lifetimes, since I now live in Canada, which is a very different life compared to Russia. In terms of just education in Siberia; I had high arts school Monday to Friday, where I painted sketched crafted for 4 hours daily, right after regular school for nearly two years and it was completely free. Compared to Canada, Toronto - such education doesn’t exist here and all the art schools are incredibly expensive. There are some good private art schools in Canada which I’ve attended, prices of which are from 15-30 dollars an hour. Currently I’m in the Illustration program at OCAD University and life drawing courses are about 500 dollars for semester- 13 classes, each one with about 3 hours of drawing. 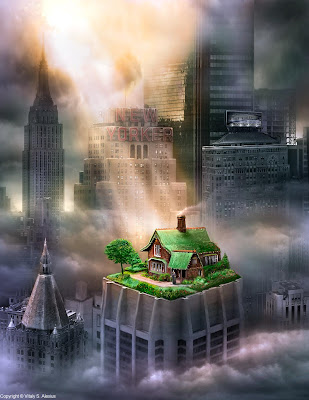 DW: I’ve read that you try to develop a personal style, one which you named “Dreaminism”. Can you describe this style, please? What do you try to express and reach with “Dreaminism”?
VA: Dreaminism is a feeling experienced in the split second before the waking, a thin line in which the mind still doesn’t realize which is more real – the dream or the world you wake into, when you can still clearly remember the dream, yet it is about to fade away. In my paintings I create realistic scenes of existing cities- New York, Moscow, Toronto, San Francisco- with a catalyst twist in them.
DW: You name some of your works as “romantically apocalyptic”. Do you prefer drawing apocalyptic visions? What sources of inspiration do you have for such works?
VA: “We find that the average-there are a number of different size atomic bombs. The total devastation varies, but they average on this earth map here... If they are expertly spread out, you’ll find we really get a complete coverage of all humanity”. Excerpt from Buckminister Fuller’s lecture, “The World Game”. From the darkest dreams of imagination in my starkly-realistic and highly-detailed style “Dreaminism” I bring to my viewers, visions of the future that will inevitably come to pass if mankind’s planet-wide industrial machine isn’t adjusted in time. I have stood witness to a fall of a Nation and great noble ideals. I have seen Russian cities ravaged by human carelessness, industrialization, depression, oppression, crime and war. I have seen science fail and unleash death in the dark cases of Chernobyl and the Aral Sea “accidents”. My vision is that of a Romantic artist, with one exception - to showcase not just the destructive power of nature, but also the destructive power of man.
DW: Speaking of apocalyptic visions, are you interested in the religious aspect of the subject or in the science-fiction one? Or do you try to approach the subject from the perspective of both aspects?
VA: Religious themes are often intertwined within my work- religion is an ultimate human tool just like nuclear energy- one can use religion to bring light, kindness and good to the world and another can use it to wipe away cities in holy wars, bring death, oppression and despair. 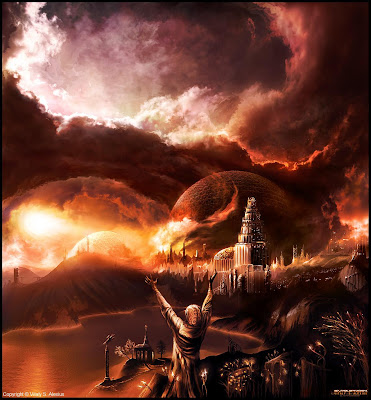 DW: I’ve seen that some of your works on the subject were made in a traditional way. Which technique (traditional or digital) do you think that gives more power to the apocalyptic visions? Do you prefer one of these techniques for other subjects?
VA: Digital medium allows me to work much faster and as I tend to work on massive scales- 1x1 meter canvasses, much cleaner for my studio.
DW: You are interested in photography as well. Do you try to achieve the same things in photography as those from your art? What different perspective is the photography offering?
VA: There’s a narrative to any photography and mine is no different, of course. My photography merely reflects and represents my journeys through the world. I always carry my camera with me, in hopes of some day capturing an extraordinary event like a UFO landing or the sky falling. Till that happens however, I’ll just stick to drawing such events. My photography also often captures images of modern cities and abandoned places, consumed by nature- searching for beauty in strangest places of decay.
DW: Being passionate about both art and photography, do you use the art techniques on your photos? Do you use the photo manipulation process often?
VA: Very often- that’s what Dreaminism is all about: enhancing reality with dream-like qualities. 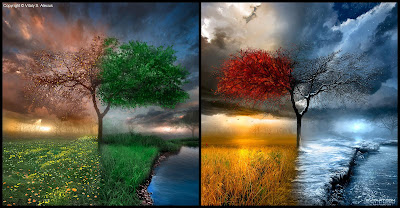 DW: You accompany many of your works with a poem you wrote. But may I ask which one is the source of inspiration? Does your art inspire your poems more often than the other way around?
VA: Usually I write the poetry while or after I create a painting, although in rare cases painting comes after the poem.
DW: Speaking of poems I reminded that you realized many CD covers. What involves the work on a CD cover? Does the music or the lyrics inspire the final piece for the cover?
VA: The process varies- sometimes I do listen to the music of the musicians while I paint their cover, sometimes I go just by my heart.
DW: You also made book covers. How different is the work on a book cover than on a CD one? Is there a novel for which you would like to illustrate the cover?
VA: Usually writers give a bit more info on what to draw, more specifics, while musicians just say- “have fun with it, just include an angel in a dead city”. I very much would like to illustrate sci-fi novels by Brothers Strugatsky- The Inhabited Island, Hard to be a God or Roadside Picnic. 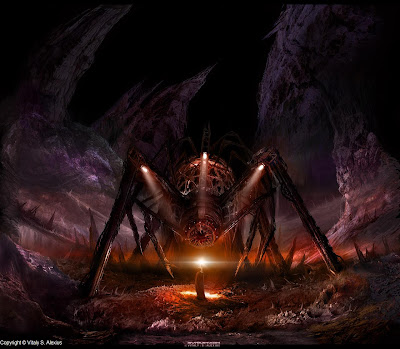 DW: You are writing your own novel as well, “Chronoscape”. Can you tell us something about it, please? Also may I ask when it will be released and if you have a publisher already?
VA: It’ll be self-published in summer of 2009 and sold through the internet. After that and final refinements and edits I’ll be looking for a major publisher. It’s a sci-fi novel that will have about 12 poster-illustrations in it done by me. It’s a story told in first person perspective about time travel- except not conventional forward-back time travel, but travel into faster and slower speeds of time- accelerating beyond the speed of light, decelerating so that centuries pass in a second.
DW: After publishing your novel would you like in the future to gather your poems and artworks in a book?
VA: Yes. A book of “collected works” will most likely be also published along with the sci-fi novel this summer.
DW: What are your future plans? On what will you be working next?
VA: I plan to open up a photo studio and get myself more involved in photography of the human body and in the meanwhile do more freelance work and travel around the world.
Thank you very much for your time and answers. 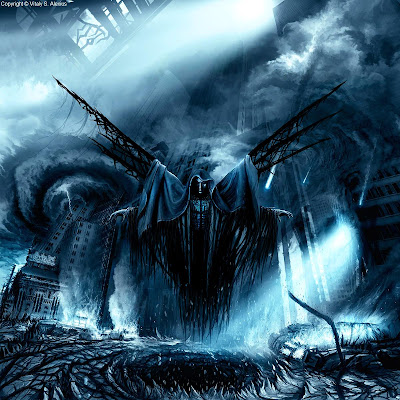 For more information about Vitaly S. Alexius and for a complete porfolio of his digital and traditional art and also photography please visit his website, Svitart.
© The artwork presented on this post is used with the permission of its author. All the artwork is copyrighted. Please do not use the images without the permission of the artist or owner.
Posted by Mihai A. at 12:09 PM

Fantastic artwork! Thank you very much for posting this!

Thank you very much, Mark. I find Vitaly's works fantastic too :)

The depth of his artwork is amazing, Mihai. He was given a gift.

Barbara, he definitely has a great and amazing gift :)

I'm impressed! What a fantastic artwork. There is so much vibe in Vitaly's pictures.
I highly recommend to visit the artist website. Dark Wolf mentioned the site and I will do it again: Vitaly S. Alexius

Michael, the artwork has some powerful vibe indeed :)