"The Dog of the North" by Tim Stretton 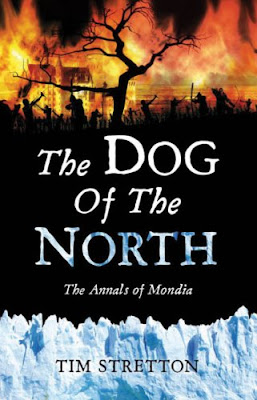 "The Dog of the North"
by Tim Stretton
Format: Hardcover, 484 pages
Publishers: MacMillan New Writing
Winter on the lawless plains of the Emmenrule. En route to her wedding in the fortified city of Croad, the beautiful Lady Isola is kidnapped. What is worse, her captor is the infamous Beauceron. But, ruthless as he may be, Beauceron is no ordinary brigand: it is his life's ambition to capture Croad itself – and he will stop at nothing to achieve it.
Mondia, though, is a continent of many stories, and in Croad, a young man named Arren has been taken under the wing of the city's ruler, Lord Thaume. Although of low birth, Arren is destined to become a knight of valour and renown. But as his fortunes rise, so those of his childhood friend Eilla fall.
Beauceron has returned with his human plunder to his home – the exquisite frozen city of Mettingloom. There, the imperious Isola finds herself reassessing her former loyalties as she struggles to adapt to her new life. Beauceron, meanwhile, is manoeuvring to raise an army. He is determined to defeat his enemies, both inside and outside Mettingloom – and to capture the city he loathes.
But what is the source of Beauceron’s obsession with Croad? Can Arren reconcile his youthful ambitions with his growing feelings for Eilla? And just who is the Dog of the North?Tim Stretton’s debut novel is a spellbinding tale of loyalty and betrayal, homeland and exile, set in a brilliantly imagined world of political intrigue, sorcery, and warfare on an epic scale.
Tim Stretton technically makes his debut with “The Dog of the North”, but it’s not his first written novel. “The Dog of the North” is his first novel which drew the attention of a publishing company, Pan MacMillan, but this novel was first self-published same as the first two written by Tim Stretton, “The Zael Inheritance” and “Dragonchaser”.
“The Dog of the North” is set in a fantastical world and follows two storylines which are developing mostly in two of these world cities, Croad and Mettingloom. These two storylines are separated by time, but are linked to each other through the characters. One such link is the base of the general conflict and it will be revealed at the end of the novel, end which will connect in full the two storylines. Croad and Mettingloom are set in the world of Mondia, a world I find quite developed, especially when it comes to these two cities. However, Mettingloom is the city which attracted me more and I find the ideas, which are at its basis, more interesting.
Mettingloom resembles a lot with Venice, Italy, with many aquavias and bridges crossing the city and has a strong naval power. But what I really liked at this city and this state is the fact that it is run by two kings, the Summer King and the Winter King. And as their names suggest their ruling is made through the seasons of a year, one of them is ruling throughout the summer period and the other throughout the winter one without the interference of the other. They have their own court, army and loyal servants and these courts can mingle with each other twice a year, at the Midsummer and Midwinter Ball. The storyline that develops in Mettingloom deals with the rivalry between these two courts, with the political intrigue and with all the self-interested characters resulting from this political intrigue. All of this revealed through one of the main characters, Beauceron, and his attempts to obtain permission and an army for an attack on Croad.
Croad is a city that resembles a European Medieval city. Although Croad has allegiance to the king of Emmenrule it is run by Lord Thaume who imposes the local politics. The story centers here on four young characters, Oricien, Siedra, the lord’s children, Guigot, the lord’s nephew and Arren, a young boy who is taken under the wing of Lord Thaume. This is basically a coming of age, with the lessons the four take and the events surrounding their growing. There is also a background conflict in this storyline, between the two religion of this city, the Way of Harmony, the official religion of the kingdom, and that of the Wheel, which is seen as heretical.
There are other small interesting things, sadly with scarce appearances through the story. Such an example is magic, named thaumaturgy because its effects are seen as miracles. But there is a small line between this magic and charlatanry and the thaumaturgies are seen as such people. One of the things that kept my interest and achieved through thaumaturgy is that in Menttingloom the heating of the noble houses is made by the summoning and the capture of small demons (called dimonettos).
Unfortunately all these interesting aspects are lost in a small pace. I found the rhythm of both storyline a bit too slow. For the storyline of Beauceron the goal is obvious from the beginning of the story and although it was interesting for me to follow it through the tangles of local politics, it loses its tracks sometimes and left me restless in some places. The other storyline doesn’t have an obvious goal at the beginning and when the line it follows becomes apparent the rhythm seems slower than on the other storyline.
“The Dog of the North” left me with mixed feelings, because it has aspects both good and bad, ups and downs and I believe that the reading of Tim Stretton’s novel requires patience due to its pretty slow pace and rhythm.
Posted by Mihai A. at 11:33 AM

Doug, it has its interesting aspects :)

Your good review was helpful for me. From time to time I like to read books with a slow pace. In case I know it before I read a book it is no disadvantage. So I will add this book to my list with the remark slow pace.

Just to add that if anyone is in two minds about buying the book, it is released in paperback in June. I'm always prepared to take a bit more of a risk on a paperback!

Michael, I feel the need for a different approach in a novel from time to time, too :)

Tim, thank you for the mention. And I have to say that the cover for the paperback looks better :)

I've just finished reading said paperback and I have left a review on Goodreads.com. Thanks for the link Darkwolf, liked the reiview. And yes, the paperback cover is better :)

Tim, looking forward to getting a copy of Dragonchaser, keep up the good work, and good luck for the DGLA. ps, I see you're in Bosham, I've passed through your train station many a time! You should get onto Goodreads.com, it's a good site for readers and authors alike.

Thank you, Ed. I am glad you liked it, although for me the novel didn't went very well :)

Thanks for the kind words, Ed. I'm glad you enjoyed the book.

If you know Bosham you'll understand that there's not a lot to do there except write!