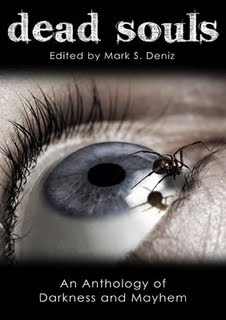 I have this horrible problem with anything going near my eyes, so that book cover is not exactly my favourite book cover ever!

I have never read any of the authors in this anthology. If I can get passed the cover, I might have to give them a try!

What a lovely detailed review. I haven't read the antho yet, but it looks like there are a few gems waiting for me.

Thanks, as always, for your detailed reviews my good man!

Kailana, I have the same problem :)
Although it can give me goosebumps, I find the cover to be quite suggestive and appropriate for the book. And I like such anthologies, because they give me the chance to discover new authors :)

Cate, thank you very much. There are indeed a few gems in the collection :)

Thank you for the detailed breakdown, Mihai! I'm very proud to be in this anthology and look forward to reading everybody's stories.

The cover is CREEPY! But, Mihai, if it fits the stories within then it was well chosen. I like reading anthologies to discover new authors and how they pen their stories. Some of your reviews have whetted my appetite, so this will be going on my Christmas wish list.

Michael, thank you too. It is a good anthology indeed :)

Barbara, it seems the cover works perfectly. I discovered quite a few authors through anthologies. I hope you'll like this collection and find authors you like too :)